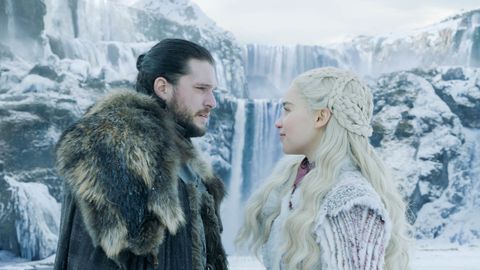 Warning: Spoilers ahead for the final episode of Game of Thrones.

Daenerys Targaryen died last night on the final Game of Thrones, something fans had expected after she became the Mad Queen in the penultimate episode and killed countless innocent people. But the way she did—Jon Snow sticking a knife in her heart while embracing her—was a lot to take in, and the entire narrative arc of Khaleesi this season was something the actress who plays her, Emilia Clarke, really personally grappled with. And now she can talk openly about it.

Clarke spoke to Entertainment Weekly and The New Yorker about the final episode and how, like some critics of the show, she found Dany's sudden shift from heroine to villain to be abrupt.

When she first read the script with Dany's death, she told Entertainment Weekly that she was thinking: “What, what, what, WHAT!? Because it comes out of f*cking nowhere. I’m flabbergasted. Absolutely never saw that coming.”

Clarke admitted, when inferring she was going to be asked whether she at any point disagreed with Dany's actions, that “it was a f*cking struggle reading the scripts. What I was taught at drama school—and if you print this there will be drama school teachers going ‘that’s bullsh*t,’ but here we go: I was told that your character is right. Your character makes a choice and you need to be right with that. An actor should never be afraid to look ugly. We have uglier sides to ourselves. And after 10 years of working on this show, it’s logical. Where else can she go? I tried to think what the ending will be. It’s not like she’s suddenly going to go, ‘Okay, I’m gonna put a kettle on and put cookies in the oven and we’ll just sit down and have a lovely time and pop a few kids out.’ That was never going to happen. She’s a Targaryen. I thought she was going to die. I feel very taken care of as a character in that sense. It’s a very beautiful and touching ending. Hopefully, what you’ll see in that last moment as she’s dying is: There’s the vulnerability—there’s the little girl you met in season 1. See? She’s right there. And now, she’s not there anymore…”

Clarke broke down to EW and New Yorker how Dany got to where she was emotionally:

She genuinely starts with the best intentions and truly hopes there isn’t going to be something scuttling her greatest plans. The problem is [the Starks] don’t like her and she sees it. She goes, ‘Okay, one chance.’ She gives them that chance and it doesn’t work and she’s too far to turn around. She’s made her bed, she’s laying in it. It’s done. And that’s the thing. I don’t think she realizes until it happens—the real effect of their reactions on her is: ‘I don’t give a sh*t.’ This is my whole existence. Since birth! She literally was brought into this world going, ‘Run!’ These f*ckers have f*cked everything up, and now it’s, ‘You’re our only hope.’ There’s so much she’s taken on in her duty in life to rectify, so much she’s seen and witnessed and been through and lost and suffered and hurt. Suddenly these people are turning around and saying, ‘We don’t accept you.’ But she’s too far down the line. She’s killed so many people already. I can’t turn this ship around. It’s too much. One by one, you see all these strings being cut. And there’s just this last thread she’s holding onto: There’s this boy [Jon Snow]. And she thinks, ‘He loves me, and I think that’s enough.’ But is it enough? Is it? And it’s just that hope and wishing that finally there is someone who accepts her for everything she is and…he f*cking doesn’t.

In regards to losing Missandei, Clarke called it one of the most pivotal moments. “There’s a number of turning points you see for Daenerys in the season, but that’s the biggest break. There’s nothing I will not do after losing Missandai and seeing the sacrifice she was prepared to make for her. That breaks her completely. There’s nothing left to making a tough choice.”

And to the New Yorker, she talked candidly about Dany's past killings and how Jon Snow changed everything for her and ultimately was her downfall:

Every time I was faced with Daenerys having to do something pretty cold, like a mass killing, it was always with this thought that she’s headed toward her destiny. She’s gone too far to turn back now. So then she finally falls in love with someone who is her age, someone appropriate, who seems to love her back, who seems to be a good guy. The fact that she’s his aunt is just kind of by the by! And then it seems almost too good to be true. Even when she finally gets to relax for the first time, she’s thinking, My God, I can have it all. I can have my love. I can have my career. I can have the prospect of a family. I can have it all....But no! I fucking can’t.

She encounters the dark side of that. She’s not wanted. She’s not loved completely there. And so she gives herself to Jon [Snow] entirely, and she gives him many, many choices, many options to see clearly with open eyes. And she’s asking him, “If you wanted to be with me, then let me fulfill this....I know I can be a good leader, so let’s do this together. Let’s do it.” And he doesn’t. And that disappointment is the final thing that breaks her as a human being, because, my God, all she’s known is pain, sacrifice, and abuse. All she’s known is people turning on her, people betraying her, and she’s completely alone. And so, with all of that, I think that it brings us to the moment where she’s on top of the dragon and making that choice.

This content is created and maintained by a third party, and imported onto this page to help users provide their email addresses. You may be able to find more information about this and similar content at piano.io
Advertisement - Continue Reading Below
More From Culture
The 'Squid Game' Ending, Explained
'NPS' Director Just Teased a Second Season
Advertisement - Continue Reading Below
Iconic Fall Movies to Get You in the Spirit
The "Berries and Cream" Trend on TikTok, Explained
Fans Are Already Clamoring for 'Sex Education' S4
What to Watch After You Finish 'Squid Game'
The Best Feel-Good Movies to Curl Up With
The 'Nine Perfect Strangers' Finale, Explained
Curl Up With a Cozy Movie This Winter
'The Great British Baking Show' Is Coming Back!