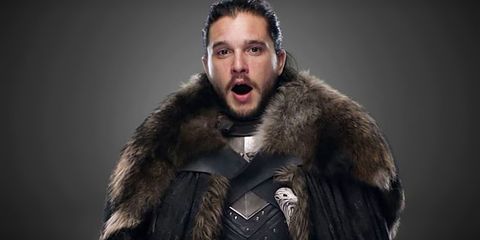 Ready your body for Reddit's greatest Game of Thrones revelation yet.

A season 7 spoiler from the /r/ASOIAF subreddit reveals Jon Snow's real name. TheRealVanDamme posted a photo from what appears to be Empire's July 2017 issue on Imgur, which explains that Bran knows Jon's real name.

Remember in the last series, there was the Tower Of Joy flashback which taught us about Jon's true heritage. In the season six finale, it was revealed that Lyanna Sark and Rhaegaar Targaryen are his parents.

So we knew his surname was Targaryen, but we had no idea about his first name. Because, if you remember correctly, Lyanna whispered, "His name is…" to Ned, but the actual name was inaudible.

So why was Jon/Jaehaerys named Jaehaerys? Well, sparkledavisjr believes this: "Jaehaerys I was the 4th Targaryen king to sit the Iron Throne. He was known as 'The Wise,' 'The Conciliator,' and 'The Old King.' His long rule was prosperous and he was aided by his sister-wife Alysanne, who convinced Jaehaerys to expand the Night's Watch and granted them the land now known as the New Gift.

"Jaehaerys II was Jon's great—grandfather. His reign was short due to his ill-health (only three years), but still a good one. Jaehaerys restored stability to the realm, ended the Blackfyre threat during the war of the Ninepenny kings, and improved relations with the major houses who were unhappy during his father's rule (Aegon V—Egg, the brother of Maester Aemon).

"If Lyanna was in love with Rhaegar (as seems likely), it makes sense for their son to have a Targaryen traditional name like his siblings Aegon and Rhaenys. Jaehaerys would be a good pick as the name isn't associated with any real negative connotations, like Aerys, Maegor, etc. Not only is Jaehaerys the great-grandfather of Jon, he was the King who received the original prophecy about the Prince Who Was Promised from the woods witch with Jenny of Oldstones.

"This prophecy is what caused Jaehaerys to force his children Aerys and Rhaella to marry, because it was prophesied that the PTWP would be born of their line. Rhaegar was aware of this prophecy, and while he originally thought that he was the PTWP, he realised later he was not and that it would be one of his children. That is why he took/seduced Lyanna in the first place. His wife Elia could not have any more children, and he knew there must be a third child (The dragon must have three heads)."