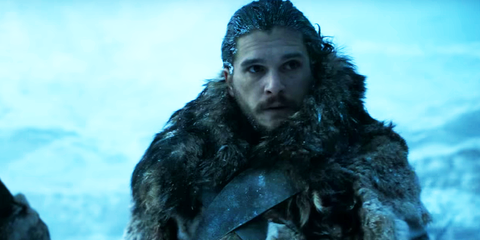 HBO just released the second official trailer for Game of Thrones Season 7. The new footage shows that Winter is here, the Great War is looming, and everyone needs to band together to survive.

"Don't fight in the North or the South; fight every battle everywhere," Littlefinger says in the background of the intro.

There are clips of Daenerys Targaryen arriving in Dragonstone, Jon Snow reaching the Wall (and possibly fighting some White Walkers?) and even the Night's King himself. We even get a glimpse of returning characters: Podrick Payne is at Brienne's side, Grey Worm and Missandei get it on, and even Beric Dondarrion is toting a flaming sword.

"For centuries our families fought together, against their common enemy. Despite their differences, together. We need to do the same if we're gonna survive, because the enemy is real. It's always been real," Snow says.

Just take a look at what he's talking about:

Sansa says in the final moments of the trailer: "When the snows fall and the white winds blow, the lone wolf dies but the pack survives."

Watch the new trailer below. Game of Thrones returns to HBO on July 16.