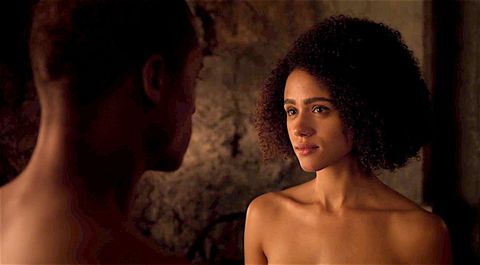 Throughout Game of Thrones, a sweet though strange romance has been brewing between Unsullied warrior Grey Worm and Daenery's handmaiden Missandei. It's partly strange because Grey Worm knows nothing but battle, training as a child to become a soldier. He's not exactly programed to love. But it's also interesting because his soldier class are castrated as children. As the description of the warrior class goes:

The eunuchs are fully castrated, with their penis and testicles cut, and their manhoods are burned at the altar of the Lady of Spears. This means that they cannot be as strong as whole men, but this is more than made up for by discipline. They regularly consume an elixir called the wine of courage to deaden their sensitivity to pain. They drink it with every meal, and every year feel less and less pain.

But now that the Unsullied enjoy more freedom under their new queen, Grey Worm and Missandei are getting close. Particularly in tonight's episode, where they finally hook up for the first time. The scene comes after a poetic confession from Grey Worm that Missandei is his only weakness. This is a scene years in the making, but it's also tragic to see his pain and hesitation when she reaches for his pants. They figure it out though. The work-around the whole castration thing is oral sex, it seems.

I don't know for certain, but I'd wager this is the first eunuch sex scene in TV history.