5
These Makeup Trends Will Dominate the Year
Getty Images

Jada Pinkett Smith is and has always been an icon. From her role in beloved films like Jason's Lyric and Girls Trip to her recent venture with the hit Facebook Watch show Red Table Talk, Smith has made a name for herself outside of being Will Smith's wife or Jayden and Willow's mom. The 47-year old has managed to become #goals for just about everything—from abs and hairstyles to family life and self-care. And you can always count on Jada Pinkett Smith for a killer selfie.

Remember in March when she wowed us all with her age-reversing short blonde haircut? FLAW-LESS. Or in June, when she dropped that sun kissed, dewy skin selfie with long blonde braids?

Well, now the Red Table Talk host is back at it again. Smith just posted a bikini picture that will make your heart stop. Sporting those same luscious blonde braids and a green bikini, Smith is absolutely glowing. Just look at her. Skin ✔️ Hair✔️And don't forget those abs.

Smith captioned her photo: "I'LL take that joyful hot girl summer thank you🌞✨" Like many celebs this summer, Smith is joining the #HotGirlSummer movement. Coined by rapper, Meg Thee Stallion, Hot Girl Summer is about "women (and men) being unapologetically them, just having a good-ass time, hyping up your friends, doing you, not giving a damn about what nobody gotta say about it,” according to Meg. And if there's anyone who is 100 percent, unapoloticalcly themselves, it's Smith.

When you’re feeling yourself for absolutely no reason😆

What did I say? She's an absolute icon. And we will forever be double-tapping on her photos. 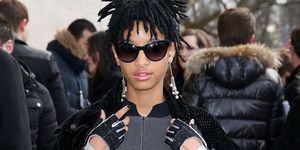 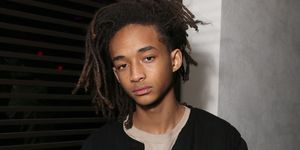 Jaden Smith Rocks a Skirt for Louis Vuitton
Alexis Jones Assistant Editor Alexis Jones is an assistant editor at Women's Health where she writes across several verticals on WomensHealthmag.com, including life, health, sex and love, relationships and fitness, while also contributing to the print magazine.
Advertisement - Continue Reading Below
More From Culture
The Best New Music of 2020 (So Far)
Listen Up: Gripping New True Crime Podcasts
Advertisement - Continue Reading Below
'The Bachelor' Has Already Finished His Season
Unmissable Horror Movies Coming Out This Year
Who Is 'Bachelor' Peter's Mom Talking About?
Sarah Coffin Might Be a 'Bachelor' Frontrunner
Who Is 'Bachelor' Contestant Victoria Fuller?
Meet the Star of 'The Bachelor's ChampagneGate
Jurnee Smollett-Bell Is a Real Life Superhero
The Best Love Songs to Ever Exist