You may know her as Spencer Hastings—the overachieving, perfectionist teen on Pretty Little Liars—but Troian Bellisario has officially left Rosewood. Since the beloved mystery thriller series based on Sara Shepard's novels went off the air two years ago, Bellisario has been pursuing new film and TV ventures, including her latest, Where'd You Go Bernadette (in theaters August 16). That's not to say she expects you to forget about Spencer—"If people are going to see me as Spencer, they’re going to see me as Spencer; I can’t change that," she says—but she does want to give PLL fans the opportunity to see her in a new light. [Editor's note: Yes, that was absolutely a John Mayer reference.]

For instance, as a bohemian artist hunting for life beyond Earth in last year's Clara, a romantic science film in which she appeared alongside her real-life husband Patrick J. Adams (Meghan Markle's former Suits co-star), whom Bellisario has been married to since 2016 and shares a daughter with. Where'd You Go, Bernadette, based on Maria Semple's 2012 novel of the same name, may not have nabbed her as much screen time as Pretty Little Liars fans would have hoped for, but it did give Bellisario the opportunity to live out her childhood fantasy of becoming a marine biologist. Oh, and working with Cate Blanchett. "It was like too many dreams being fulfilled at once," she laughs.

In the film, Bellisario plays Becky, a researcher in Antartica who collects soil and ice core samples and who helps Bernadette Fox (Blanchett) rediscover her passion for architecture—but that's only part of it. The movie centers on Bernadette's struggle with agoraphobia—an anxiety disorder people experience when they feel their environment is unsafe and inescapable—and her family's attempt to spark the creativity she lost years ago. Semple's humor is, of course, sprinkled throughout the film (with Kristen Wiig as a co-star how could it not be?), and at the end of the day it's a movie about finding joy again. If you pay attention, Bellisario's character plays a pivotal role in that discovery, radiating the pride she receives through her own environmental work.

Similar to Blanchett's character, Bellisario has struggled with anxiety, and she understands the importance of portraying mental health realistically on screen. "If you’re struggling, one of the most difficult things is feeling as though you’re wrong or that you shouldn’t be feeling this way or that you shouldn’t talk about it," she says. "I think the most helpful thing for me was speaking out about my anxiety and depression and engaging with mental health professionals. And letting people that I love know that I was struggling."

The most helpful thing for me was speaking out about my anxiety and depression...letting people that I love know that I was struggling.

Unfortunately, no penguins were spotted during the making of the film (the movie was shot in Greenland, though it's set in Antarctica). Despite the disappointment, Bellisario did enjoy a coincidental parallel to her Pretty Little Liars days. Both Where'd You Go, Bernadette and PLL are book adaptations, and Bellisario loved the idea of getting to know the characters on the page first. "When I got the role of Spencer, I had all of these books that I could go and read, spending hours in Spencer’s mind because it was all there, all of this backstory," she explains. "And Where’d You Go, Bernadette is such a fun novel. When I got the role, I bought the book and got lost [in it]. It was a total blast to read."

As for what's next for Bellisario? She's keeping that a secret...for now, and focusing on one project at a time. "I still get a lot of [Pretty Little Liars fans] asking me, Oh, are you guys going to go back and film another season?" she says. "Right now, I just feel really grateful to be a part of this incredible cast and crew. I hope everyone enjoys the movie." 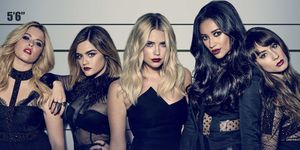 I. Marlene King on Being Bullied During 'PLL'
The Best Fiction Books by Women This Year
This content is created and maintained by a third party, and imported onto this page to help users provide their email addresses. You may be able to find more information about this and similar content at piano.io
Advertisement - Continue Reading Below
More From Culture
The Brand-New Audiobooks to Add to Your Lineup
Is Fisher Island from 'Maid' a Real Place?
Advertisement - Continue Reading Below
A Horror Bucket List for Scary Movie Buffs
'Succession' Renewed for Season 4
Tati Gabrielle Answers Your Burning Questions
Who Is Nayte Olukoya from 'The Bachelorette'?
So, Who Wins Michelle's Season?
All the Deets on Michelle's 'Bachelorette' Season
'Virgin River' Season 4: Everything We Know
The 19 Sexiest Movies on Netflix