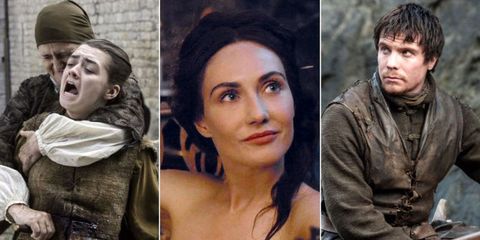 Much as we love Game of Thrones, even a world populated by magicians, monsters, and dragons has to have some internal consistency. But it's left us scratching our heads (and turning to Google for answers) more than once.

So after an obsessive analysis and too many cups of coffee, we've picked out 11 times the show made no sense.

1. How did Varys and Arya travel across the Seven Kingdoms so quickly?

Even just Westeros and Essos combined makes for a pretty big land mass, so how exactly do characters on GoT zip from one kingdom to another in such a short space of time?

Littlefinger alone traversed something close to 3,500 miles in just a few episodes, while Tyrion's trip from Winterfell to Meereen would equal upwards of 6,000 miles.

"The timelines of the various story threads don't necessarily match up all the time," producer Bryan Cogman has insisted. "This is to avoid things like, say, Arya spending four episodes on a boat."

Hmm. Not convinced. We prefer our own theory that Varys has mastered the power of teleportation.

Game of Thrones: NOW we know how Varys got from Meereen to Dorne so quickly... pic.twitter.com/Nm4dE8trzE

2. How did Arya survive her stabbing by the Waif?

She's a tough cookie, no question, but for Arya to survive a knife being shoved into her guts—and twisted—by the Waif? And then to engage in an epic parkour chase through the streets of Braavos? And all it took to tend her wounds was a little TLC from Lady Crane?

It took less to off the mighty Khal Drogo. Nope. Sorry. Not buying it.

But all it took to bring Jon Snow back from the dead was a quick sponge down and a haircut? What are the rules here?

4. Melisandre took off her necklace once before—and nothing happened

Slipping off her magic necklace at the close of last year's "The Red Woman" revealed Melisandre's true form—pale, wizened, and almost impossibly ancient.

But wait, didn't she take her necklace off once before, while taking a bath in season four's "Mockingbird?" With no ill effect? (Carice van Houten has, however, explained this one away as an "oops moment.")

5. How did the Sand Snakes teleport to King's Landing?

The women of Dorne seized control in season six, executing both Doran Martell and his heir Prince Trystane.

Except...Trystane was on a boat moored at King's Landing. How exactly did the Sand Snakes make their way to the capital, board Jaime's ship, murder the prince and escape back to Dorne, totally undetected?

6. Why didn't Tywin figure out who Arya was?

Tywin Lannister was a wily old sod, as cunning as he was cruel. So why, when Arya posed as a servant boy and fell into the King's service at Harrenhal, didn't he suspect who she was?

He knew that she was a girl from the off, but even when he learned that his new cupbearer was noble-born, from the North, and in hiding...He didn't figure her for Arya Stark? Nah.

7. How did Will survive his encounter with the White Walkers?

We'll forgive you for not remembering Will, who appeared only in the GoT series premiere. A ranger of the Night's Watch, Will not only escaped a pack of Wights but somehow made it from the Wall to Winterfell—hundreds of miles—without food, water or any supplies.

Ned Stark didn't believe his story either and executed Will as a deserter. Can't say we blame him for being suspicious. We might accept that the White Walkers let him go because they wanted the living to know that the dead were coming—but if so, why?

Cast your mind all the way back to season one. An assassin bearing a dagger made of Valyrian steel tried and failed to kill the crippled Bran Stark. Littlefinger did what he does best and lied, placing the blame at Tyrion's door.

Tyrion was freed after Bronn won a trial by combat on his behalf, but why has he never attempted to get even with Petyr Baelish since? We guess he's been kept pretty busy.

9. How did Khal Drogo melt that gold so fast?

Yes, it was super badass, but unless the rules of physics are entirely different in Westeros, Khal Drogo's method of murdering Viserys Targaryen makes zero sense.

The melting point of gold is nearly 2,000 degrees fahrenheit. The average cooking fire, at most, would reach approximately 700 degrees. Yet Drogo melts five gold medallions into a bucketful of molten liquid in a matter of seconds. Balderdash.

10. Do Euron's shipwrights have magical powers?

Opinions are divided over whether Euron Greyjoy brings a welcome dash of irreverence or an annoying splash of irrelevance, but there's no explaining his mighty fleet. Yara and Theon stole his best ships while he was revelling in inheriting the Driftwood Crown. Maybe they're really fast runners. Fine.

Euron told the Iron Islanders—all 20 or so who had assembled on the cliffs—to build him a fleet of 1,000 ships. And hey presto, by the next season it's done. And not just any ships—awesome ships that destroyed the (other) Greyjoy and Dornish combined forces.

In the 16th century—just for comparison—it took shipyards up to a year to build one ship. Just how many shipwrights does Euron have back on those poxy little islands? And where's he getting the wood from?

This content is created and maintained by a third party, and imported onto this page to help users provide their email addresses. You may be able to find more information about this and similar content at piano.io
Advertisement - Continue Reading Below
More From Culture
The Best Serial Killer Movies Ever Made
What to Know About Tayshia's 'Bachelorette' Cast
Advertisement - Continue Reading Below
Tara Palmeri on Hosting a Podcast for Survivors
It's Been a Weird Year for 'The Bachelorette'
Clare Crawley's 'Bachelorette' Cast Is Out
Honor RBG With These Books & Movies
Sad Movies for When You Need a Good Cry
'The Undoing' Is Packed With Stars
How to Join Marie Claire's Online Book Club
'His Only Wife' Is Our October Book Club Pick