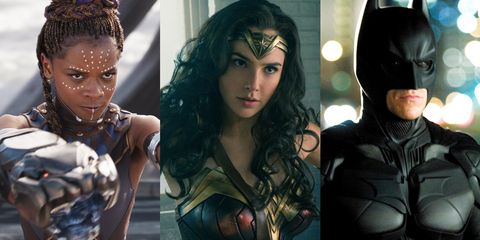 Courtesy of Marvel and Warner Bros

If you had one superpower, what would you choose? If you're just like me, and your only toxic trait is your chronic tardiness (at least I'm self-aware), you'd pick the ability to teleport anywhere in the universe within seconds so you can stop being the last one to arrive to brunch. Or perhaps you'd like to be able to read people's minds or, even cooler, control their minds! Maybe you'd rather have the superpower of communicating with animals so you won't have to wonder what your dog really feels about you.

In a much cooler reality, we'd all have superpowers and be able to make the world a better place—unless you're more into creating chaos and calamity, which...that's cool, too. For now, we just have to settle with being mere mortals and watching our favorite superheroes duke it out with the baddest of the bad onscreen instead. Below, 10 of the most epic modern superhero films, starring everything from awkward teenage boys who get bitten by radioactive spiders to actual magical rope-wielding goddesses.

No matter who you think the best Batman is (among all of the 40+ actors who have played the caped crusader on TV or in film, the only wrong answer here is Ben Affleck), there's no denying that The Dark Knight is one of the best iterations of the classic comic. Christian Bale reprised his role as Gotham's broody billionaire, and Heath Ledger brilliantly played his arch nemesis the Joker in the 2008 superhero thriller. It might be hard to watch now, knowing that the film was among Ledger's last works before he passed away, but The Dark Knight is just too good to miss out on.

The year is 2029, and concerted efforts made by the government have led to the tragic near extinction of almost all mutants. A disillusioned and even gruffer than usually Wolverine and Professor X are the last mutants on earth—or so they think. Logan is the final installment of Wolverine's story, and it's like no other X-Men film you've ever seen before because 1) it's for sure going to make you cry, and 2) there are quite a few f-bombs being thrown around.

Here's the thing about Watchmen: Either you love it or you didn't really get it, which probably made you hate it. Regardless of what position you took, the 2009 adaptation of the DC Comic limited series is necessary viewing for anyone who considers themselves a fan of superhero stories. It's darker than most films in the genre, but as a result, you might just find yourself leaning into its plot a bit more.

The plot of the series is so popular that its being brought back, this time to HBO in October. Oscar-winner and queen of acting Regina King stars in the drama, which takes places thirty years after the comic book's storyline ends in a world without cell phones or smartphones. Sounds like a nightmare...I'm in!

Although he appeared in the first two Avengers movies and even had his own films, I have to admit that Thor didn't quite win me over until he got that surprisingly sexy haircut and lost a whole eye in Thor: Ragnorak. In the rowdy intergalactic adventure, the god of thunder faces off with his long-lost sister, the goddess of death Hela (who would've ever guessed that Oscar-winner Cate Blanchett was born to be a super villain?), after the untimely death of his father, and the siblings duke it out for control of their homeland Asgard.

From the incredible bromance between Thor and Bruce Banner/Hulk to the introduction of badass Valkyrie into the Marvel Cinematic Universe to Jeff Goldblum pretty much playing himself, Ragnorak rightfully earns its place on any list of must-watch superhero movies.

Formerly beloved superhero couple Mr. Incredible and Elastigirl are pressured into hiding when the court of public opinion finds them and the heroes like them guilty of doing more harm than good (super reasonable—have you seen the damage that superheroes do to the city every time they fight?). Fifteen years later, they're parents of three, living the boring lives of the civilians in suburbia, when a sudden appearance of a villain from the past forces the entire family to don their super suits once again.

Finally, a good film about a female superhero—sorry, Catwoman. Gal Gadot stars in this DC Universe offering as Diana Prince, the love child of Zeus and mortal queen Hippolyta of Themyscira, who embraces her destiny as a superhero/goddess/badass amidst the events of World War I. Aside from being important to superhero lore for obvious reasons, Wonder Woman is also a really great love story between two extremely good-looking people. Chris Pine...mmm.

There are a literally a million different and extremely valid reasons as to why everyone needs to watch Black Panther (at the top of that list would be Winston Duke man-spreading atop a snowy mountain), but I unfortunately don't have all day to spend waxing poetic over what I consider to be one of the cinematic masterpieces of the MCU. To save time, I can just rattle some of the incredible actors starring in this film. Chadwick Boseman. Lupita Nyong'o. Angela Bassett. Michael B. Jordan. Danai Gurira. Daniel Kaluuya. Forest Whitaker. STERLING K. BROWN—look, you get the picture.

Robert Downey Jr. booked the role of a lifetime when he was scouted to become Tony Stark, the comic book world's other, less surly billionaire in the 2008 blockbuster Iron Man. He didn't know it then, but Downey's onscreen gig as the most privileged man in the universe was setting him up to be the star of one of the biggest, most successful story arcs in Hollywood. Without Iron Man, there would be no Avengers, and we just can't have that.

The life of Brooklyn high schooler Miles Morales is turned upside down after he's bitten by a radioactive arachnid, giving him the powers of a spider. He discovers the existence of a multi-verse, leading him to meet the various Spider-heroes from other dimensions. Together, they have to work together to take down the various villains from each of their realities.

Into the Spider-Verse is widely considered one of the best superhero movies ever and has won a Golden Globe and and Oscar. In your face, Spider-Man purists who were pissed that Spidey was finally someone other than a white man.

It's been several months since the events of Avengers: Endgame unfolded onscreen, but if you ask any fan of the Marvel Cinematic Universe, it still hurts like it was just yesterday. In the stunning conclusion of Phase Three of the MCU, the Avengers' fearless co-captains Tony Stark and Captain America lead what's left of his team into battle with mad titan Thanos to try and bring back the other half of the universe that was snapped out of existence.

Besides being extremely long for a superhero movie—the film is three hours long and could have been even longer had the directors gone with their original idea—Endgame is the MCU movies of all MCU movies, neatly bringing together every existing storyline within the MCU ecosystem and ushering in a new era...one that happens to not include either Iron Man or Captain America as we knew them.

Related Story
These Are the Most Iconic Movies in Black Cinema
Ineye Komonibo Ineye (in-NAY-yay) Komonibo is the editorial fellow at MarieClaire.com.
Advertisement - Continue Reading Below
More From Unmissable Movies
The Best Romantic Films of the Year (So Far)
The Very Best Rom-Coms of All Time, Ranked
Advertisement - Continue Reading Below
The 13 Best Upcoming Movies in 2020
The Films That'll Have You Laughing Through 2020
The Most Exhilarating Thrillers of 2020 (So Far)
The Best Rom-Coms Netflix Has to Offer
The Most Exciting New Movies Directed by Women
Unmissable Horror Movies Coming Out This Year
The Documentaries You Can't Afford to Miss in 2020
Movies That Are Bringing the Drama in 2020