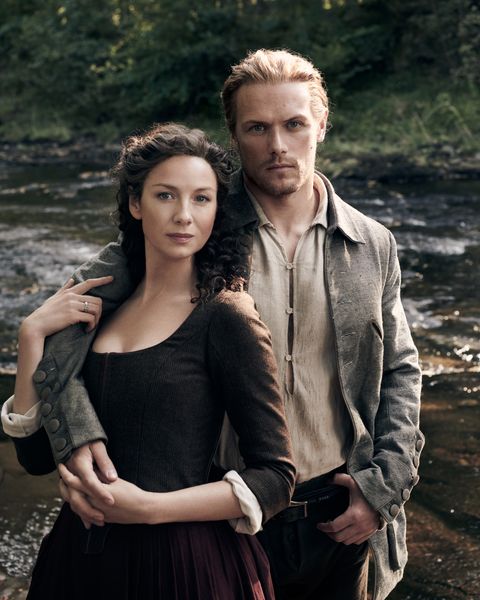 When Caitriona Balfe and Sam Heughan were promoting Season 5 of Outlander, they were asked about what effect their new roles as producers of the show had on the story. At a panel at the 92nd St Y in February they said we wouldn’t really see their influence till the second half of the season. "We’ve always kind of been part of the process in more or less a degree," Heughan told the audience, "but I think this season, as the season goes on, we have more of a say, and by the end of the season we really fought—or not fought, but were very collaborative with the director and producers...and I hope it comes across, because it’s some really strong stuff."

"I think as an entire production, we took some real risks this season," Balfe said in agreement. "It sounds like we haven’t seen them yet, but it seems like the fact that in season five, we’re taking risks is a really great thing."

Well, I’ve been lucky enough to get an early screening of the next four episodes–most of that second half of season 5, including episode 7, which airs today. And I feel like I’m looking at an entirely different show.

There’s still a big battle scene in episode 7, "The Ballad of Roger Mac. There are major turning points for Heughan’s character, Jamie Fraser. A heartbreaking one when a beloved character dies–something Heughan accidentally let slip at the Y panel. A decisive one when Jamie tells off the Governor for his actions and begins to choose a side in the Revolutionary War. There’s a casting surprise and a final tragedy at the end of the episode.

But this episode and the others I’ve seen feel much more intimate. The chemistry between Heughan and Caitriona Balfe (who of course plays his wife, Claire), so sizzling in earlier seasons, is back. It’s different—filled with moments of teasing tenderness and a love so deep that words are not always necessary. But the words that are spoken feel genuine and organic. No matter what kind of mishegas is happening behind the scenes, on screen their connection is palpable.

Claire’s medical knowledge, threaded throughout the episodes is key to so much of the story. But her 20th century self-confidence incurs the hatred of a misogynist that may come back to haunt her later.

The acting is better. At times it’s great. In Episode 8, Rik Rankin as Roger MacKenzie gets to shine along with another favorite character who returns to the show. The directing is interesting here–especially the use of a cinematic device to illustrate flashbacks. Episode 9 is just a showstopper. Balfe and especially Heughan really bring it to this one. There is a moment between the two of them that is so intimate and moving as Claire makes a desperate effort to save a man’s life.

At the 92nd St panel, Balfe talked about how the episodes this season felt more like those in the first season in that each one was a self-contained story arc. "One thing about this season is that I think we've managed to get back that feeling of each episode having their own flavor, and being slightly their own little contained story, and having their own arcs," she told the audience. "A chapter," interjected Heughan. "Yeah, and some episodes almost feel like little genre episodes. And it's kind of nice because I think that's something that was really special about our show in season one in particular, that we always had the through-line of these stories and these characters, but we sort of took time to make each one feel individual. And that was really interesting. So I think we've definitely gotten back to that."

Well, episode 10 is that exactly. There is a chillingly evil bad guy, suspense, and retribution. Much of the action centers on Sophie Skelton who plays Brianna, the Frasers’ daughter, and she does her best work in it.

This being Outlander, just when you think everything’s gonna be okay, there’s another twist. In the episodes I’ve seen there’s laughter and tears, vengeance, love and loss, and at least at the moment, a satisfying end. But stay tuned—I know I will.

Related Stories
Sam Heughan Reveals Major 'Outlander' Spoiler
Crazy Facts About the Making of 'Outlander'
Behind-the-Scenes Pics from the 'Outlander' Set
This content is created and maintained by a third party, and imported onto this page to help users provide their email addresses. You may be able to find more information about this and similar content at piano.io
Advertisement - Continue Reading Below
More From Culture
'Ginny & Georgia' Season 2: Everything We Know
'Bridgerton' Season 2: Everything We Know
Advertisement - Continue Reading Below
The Best Feel-Good Movies to Curl Up With
'Shadow and Bone' Season 2: Everything We Know
Will There Be a Season 3 of 'Virgin River'?
The 'Younger' Cast Plays Trivia About Each Other
The K-Movies on Netflix You'll Be Hooked On
The 12 Best Action Movies of 2021 (So Far)
Ready for a Good Cry? Try a Korean Romance Movie
The Most Eagerly Anticipated Horror Movies of 2021