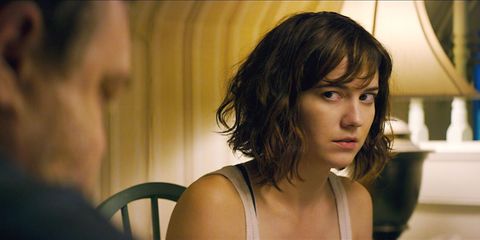 If you don't quite have the stomach for chainsaws and haunted houses (*raises hand*), but are still looking for a fright fest this Halloween, may we suggest the psychological thriller? This genre—filled with mystery, drama, and, of course, paranoia—is sure to make your stomach churn and your heart palpitate with fear, and yet won't make you necessarily fear every bump in the night. Here are the best thrillers to watch that aren't your standard slasher flick (but let's be honest: We'll still be sleeping with the lights on).

This 2007 David Fincher movie is a little long in the tooth (it clocks in at two hours and 47 minutes), but it maintains a tight grip on your nerves for most its runtime. It follows a team of investigators and reporters who are hot on the trail of the very real Zodiac Killer, the prolific murderer who terrorized San Francisco in the 1960s and 1970s, taunted police, and was (it's not a spoiler if it's true) never caught. Quick reminder to lock your doors, people!

The superior of two old timey magician movies that came out in 2006 (the other was the Ed Norton vehicle The Illusionist, which is also pretty good but not nearly as good), The Prestige follows two childhood friends who, as adults, become rival magicians at a time when magic was hot, hot, hot. (Though, I'm sorry, is magic suddenly not cool anymore? Didn't think so.) Starring Christian Bale and Hugh Jackman, this is a twisting, seat-of-your-chair tale of mistaken identities, sabotage, and deception.

This 2001 movie is pretty scary: Told from the perspective of a man (Matthew McConaughey) who's gone to confess to the police, he tells the officer the story of a father raising two boys who suddenly thinks God has spoken to him. And what was God saying? Why, tto kill people because they're actually demons, of course! But where this plot actually ends up, and the twists along the way, are so clever that you'll forgive the more heart-pounding moments. The payoff is worth it.

A 1954 Hitchcock classic and also one of his most timelessly suspenseful films, Rear Window introduces us to a man (James Stewart) who's confined to his house with a broken leg and who, out of what is initially boredom and then curiosity and then horror, begins spying on his neighbors. With the help of his girlfriend, played by Grace Kelly, he tries to solve the mystery of the disappearance of one of his neighbors.

If we've said it once, we've said it a thousand times: Clowns. Are. Terrifying. This PG-13 movie based on Stephen King's scary clown book of the same name follows a group of kids trying to uncover the mystery of missing children in their neighborhood. Naturally, this introduces them to a clown named Pennywise who can shape-shift into your biggest fear.

Though this Oscar-nominated movie gets billed as a horror film, it's so heavy on the dark comedy, winking social commentary that I (a very squeamish, can't-handle-gore viewer) could totally handle it. Heck, I loved it. For those who don't know, it's about a black man who goes to visit his white girlfriend's cringingly "woke" suburban parents and finds the entire situation a little unnerving. Maybe he should have listened to those instincts earlier.

Sequels are rarely better than their original movie, but 10 Cloverfield Lane is a stunning exception. The follow-up to the first alien flick is vastly different, following a woman who, after a car crash, wakes up chained to a wall in a bunker with two strange men. The bunker owner (played by John Goodman) leads her to believe that a massive chemical attack has left the air unbreathable, but she starts plotting her escape when life inside the bunker becomes poisonous, too.

Don't Breathe is one of those movies that's best watched from behind splayed fingers. A trio of robbers breaks into the home of a wealthy ex-soldier who was blinded in war, thinking that it will be an easy heist. Everything's hunky-dory...until the blind man wakes up. Soon, the group realizes they've chosen the wrong man to cross—the house they've entered is actually a maze of horrors.

If you're not into actual ghosts, there's always creepy, suspenseful The Girl on the Train. Emily Blunt plays a divorcée who's captivated by a couple she sees every morning from the train—until one day she spots something unnerving. She blacks out for a night only to find out when she comes to that the woman she watches from the train is dead and she's getting called into question for the murder.

Take a seat at the table for The Invitation, which tells the story of a casual dinner party gone awry. A man defies the basic rules of not visiting exes (classic mistake!) when he meets his ex-wife and her new husband for a party. He finds out that they've returned from Mexico recently, where they cozied up with a cult leader—and things get fishier from there.

The Silence of the Lambs changed the way the world looked at thrillers. It was terrifying, thought-provoking, and a genuinely great movie (it won the Best Picture Oscar!). It's scary enough for Halloween without entering chainsaw-wielding murder territory.

The Sixth Sense is best known for its famous twist ending, but it has incredible rewatchability too. Plus, this is a thriller that's also a ghost story, making it perfect for Halloween fright fests.

This content is created and maintained by a third party, and imported onto this page to help users provide their email addresses. You may be able to find more information about this and similar content at piano.io
Advertisement - Continue Reading Below
More From Unmissable Movies
The 25 Most Underrated Films Ever Made
Sad Movies for When You Need a Good Cry
Advertisement - Continue Reading Below
The New Netflix Original Films You Can't Miss
Thrilling New True Crime Documentaries
The 42 Best Murder Mystery Movies of All Time
Historical Films to Stream If You Loved 'Hamilton'
The Top-Grossing Book-to-Movie Adaptations
Don't Miss These New Movies Based on True Stories
The Most Anticipated Comedies of 2021
Treat Yourself to a Chick Flick Tonight