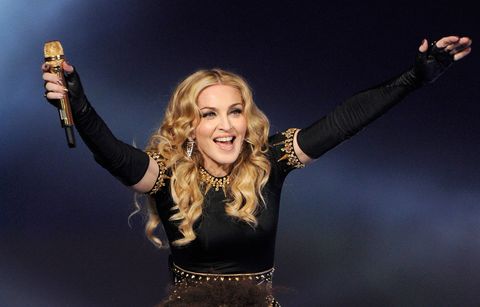 Christmas has come early by way of Madonna, who released six new songs from her forthcoming album, Rebel Heart, on iTunes over the weekend. The decidedly awesome surprise comes after the not-so-awesome recent demo leaks that the singer controversially likened to "artistic rape" and "a form of terrorism."

"I was hoping to release my new single 'Living for Love' on Valentine's Day with the rest of the album coming in the Spring," Madonna said in a statement. "I would prefer my fans to hear completed versions of some of the songs instead of the incomplete tracks that are circulating. Please consider these six songs as an early Christmas gift."

In a new interview with Rolling Stone, Madonna opened up about working with Minaj, revealing that the hip hop queen gets right down to business. "Whenever we work together she always sits with me and listens to the song, and says 'Tell me what this song is about to you.' She's very methodical in her thinking," Madonna explained. "We talk about it, she writes down words that I say describing what the song's about and the sentiment that I'd like her to get out there, and then she goes away and she works on it. She writes it, she comes back. She does a version of it, we talk about it. It's a back and forth until she gets it right. It's a total collaboration."

The forthcoming album boasts 19 tracks in total, featuring collaborations with Kanye West, Diplo, DJ Dahi, and Blood Diamonds. More music will be released on February 9 prior to the official album drop.

The day after the songs hit iTunes, Madonna was number one on its charts in 41 countries. Rebel Heart, her 13th studio album, hits stores March 10th.

You must also check out:

12 of Madonna's Most Scandalous Controversies

Katy Perry and Madonna Did a Bondage-Themed Photo Shoot