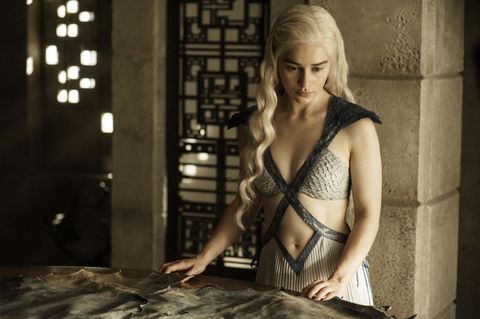 Don't look so bummed out, Dany—we'll be together again in approximately 3 months, 2 days, 21 hours, and 35 minutes.

HBO announced Thursday that Game of Thrones will return April 12, the same day Silicon Valley and Veep, two shows that don't have dragons, will also premiere. (This is the part where you cancel all your appointments. We'll wait.)

For hardcore GoT fans, the pain of waiting will likely increase steadily until Jan. 23, when would-be Westerosians can view a full-length trailer for the upcoming season on IMAX screens across the country. As for those with slower clicking fingers, these 10 seconds of grainy, leaked footage will have to do.

The Queen Name-Drops 'Game of Thrones,' Internet Loses It

Chelsea Peng I'm Chelsea Peng, the assistant editor at MarieClaire.com.
Advertisement - Continue Reading Below
More From Culture
Treat Yourself to a Chick Flick Tonight
Who Will Be on 'Bachelor in Paradise' in 2020?
Advertisement - Continue Reading Below
An Investigation Into the Next 'Bachelorette'
'The Bachelor' Has Already Finished His Season
Can We Talk About Kelly's Mom From Love Is Blind?
The Best Reactions to the 'Love Is Blind' Finale
Hilary Duff Hints About 'Lizzie McGuire' Reboot
Ryan Murphy's Producing a Love Letter to Hollywood
This Is When the 'Love Is Blind' Finale Will Drop
Will Gigi and Damian Actually Get Married?