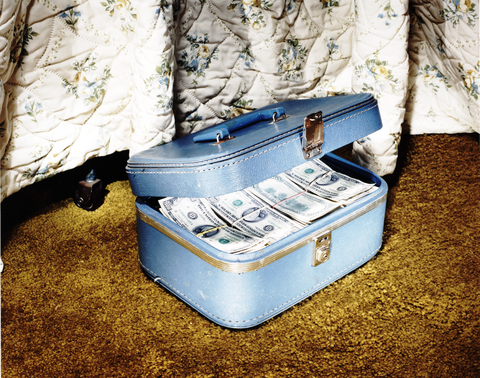 Growing up, I never thought of myself as particularly poor—mostly because I never wanted for food or clothes or warmth or home. I knew I was lucky, because I grew up in a part of town where others weren't so well off. I often saw my friends and their parents struggle. Even before I made it to double digits, I could appreciate that mine were working their asses off—my mom got a nursing degree with two young kids to take care of.

But when you grow up in a town that hovers around 23% under the poverty line (far above the national average); when plenty of your meals consist of cheap standbys like mac and cheese and ramen; when you know what free lunch programs taste like (why was the ham sandwich always so wet?!) and you end up going to a prestigious university and later, moving to one of the most expensive places to live and earning a salary that makes you rethink following your passions, you get it. The conversations you have with your parents are very different than the ones your cubicle mate is having with theirs.

"I have PB&J Mom, so I can last a couple more days 'til the next paycheck," you say, knowing that your bank account is about $2 away from being overdrawn and that your mom would send you money she needs to eat because she loves you and doesn't want your muscles to deteriorate because "you need your protein!" (Eggs are really cheap, thank god.) This, of course, is the same day your roommate announces they just bought some expensive designer shoes at Barneys because they were on sale and "my parents paid my rent this month."

But this isn't a pity party. This is about how growing up poor can drastically change your perception of money. I know because it took me a long time (most of my early 20s) to figure it out.

A study by Princeton researchers in 2013 called "Poverty Impedes Cognitive Function" found that those growing up with limited resources had a reduced ability to make better future decisions when it came to, well, anything. Because they already had to mentally make so many trade-offs ("Do I buy my kids bread or do I buy those diapers?"), they couldn't deal with larger choices that were mentally taxing—which impacts savings, buying insurance, going for a mortgage instead of paying rent, etc. All things that could, eventually, help you into a better place financially.

"When you're poor you can't say, 'I've had enough, I'm not going to be poor anymore.' Or, 'Forget it, I just won't give my kids dinner, or pay rent this month.' Poverty imposes a much stronger load that's not optional and in very many cases is long lasting," co-author Eldar Shafir said. "It's not a choice you're making—you're just reduced to few options. This is not something you see with many other types of scarcity."

But this impacts decision-making on a larger scale, too. As someone who grew up with a small bank account (and have been working since the age of 15), when I got my first influx of cash—I spent it. The $800 that came from my grandfather after his passing when I was 22 and had just moved to New York City went to things I couldn't buy before—a dinner out with my new friends, drinks with co-workers, and a trip to see my best friend in LA. Did it go to paying off those student loans? Nope. Not a cent.

As one journalist wrote, "When a windfall check is dropped in your lap, you don't know how to handle it. Instead of thinking, 'This will cover our rent and bills for half a year,' you immediately jump to all the things you've been meaning to get, but couldn't afford on your regular income. If you don't buy it right now, you know that the money will slowly bleed away to everyday life over the course of the next few months, leaving you with nothing to show for it. Don't misunderstand me here, it's never a 'greed' thing. It's a panic thing. 'We have to spend this before it disappears.'"

It's true. Those who grow up poor are actually more likely to spend—especially in times of crisis—than their wealthier counterparts. It's not only because we lack the money management skills, but it's psychological: We don't want that money to just slip away, and we also want the things that can make us "normal" to others.

"I hear it from people all the time," financial planner Katie Brewer told Learnvest.com. "They spoil themselves as adults because they're making up for all the ways they felt deprived as kids."

So what do we do? We spend on things because we "deserve them." We save very little. And we don't learn about things that could save us heartache in the long run—like 401Ks and IRAs—because 1) We need the money now and 2) That's what "wealthy" people have, not us.

As a young person in New York, it's easy for me to get swept up in the trappings of the city. Happy hours here, sample sales there. Working amongst fashion journalists and being the person who tells you what to wear and how to wear it and reporting on the $1,600 bag "everyone" is buying is part of the job—it creates a want for a type of lifestyle I just can't afford.

And it's the realization that I can't afford it—the sobering truth of that statement—that has led me to realize that I don't need to. After hitting rock bottom around 24 (relatively young, I know), I needed to start from scratch. And making an editor's salary meant re-learning all the things I should have learned earlier on. So I stopped thinking like a poor person. And I started thinking like the person I wanted to be.

I learned things that seemingly everyone else knew, but I didn't. I learned how to save by socking away money where I couldn't see it—in an account separate from my "regular" one that I check infrequently and that automatically pulls from my checking account on payday. I learned how to spend less on things I actually did need to buy and avoid triggers like "20% off" coupons that made me want to buy things I didn't need because they were on sale. I learned the power of saying "no" to happy hours and to dinner invites and to birthdays where I didn't even know the person's middle name.

I learned what a 401K was. I did my research on banks and credit cards and sliced my debt in half. I put myself on payment plans and created a financial forecast.

Did you grow up poor, too? Learning these three behaviors helped me, and hopefully, will help you, too:

But not everyone is as lucky as me. Not everyone has the littlest bit to save when bills and necessary expenses are said and done. I get that. I support bills that up the minimum wage. I support services like Planned Parenthood that provides medical treatment that otherwise wouldn't be available to many. I rally against systems that put others at a disadvantage. I donate free beauty products I get from my job to women's shelters. And I volunteer my time with homeless services that hopefully make an impact in people's lives.

Because we all have to understand that being poor isn't just a condition. It's a context in which you learn to live the rest of your life. And once we learn how to tackle that mentality, we have to help others do it too. And honestly, that's really the best way to be rich, isn't it?

How to Eat Healthy When You're Broke as Sh*t

Samantha Leal Senior Web Editor I'm Sam, the senior editor at MarieClaire.com.
This content is created and maintained by a third party, and imported onto this page to help users provide their email addresses. You may be able to find more information about this and similar content at piano.io
Advertisement - Continue Reading Below
More From Culture
Fans Are Ready for Second Season of 'Bling Empire'
What We Know About Part 2 of 'Lupin'
Advertisement - Continue Reading Below
You *Need* to Follow the 'Bling Empire' Cast on IG
Watch the Trailer for the New 'Euphoria' Special
We've Getting a Season 2 of 'Bridgerton'
New Drama Movies That Promise to Move You
The Sexiest New Movies of the Year
A Look Back at Princess Anne's Life in Photos
Where Is the Cast of 'Gilmore Girls' Now?
'The Bachelor' Is Back!