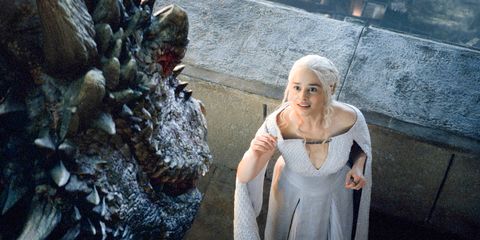 Highly recommended: avoiding people who've got no qualms about illegal downloading because they've probably seen half of Game of Thrones season five already, and you don't need that kind of anxiety in your life.

According to Variety, the first four new episodes popped up on piracy networks Saturday, almost a full 24 hours before the television premiere. By 5 p.m. Sunday, the leaked episodes had been downloaded more than 1.7 million times worldwide.

"Sadly, it seems the leaked four episodes of the upcoming season of Game of Thrones originated from within a group approved by HBO to receive them," HBO said in a statement, seemingly confirming Mashable's theory that they came from a screener. "We're actively assessing how this breach occurred."

In other words, resist the urge to do some Google sleuthing, or worse, Torrent. Or, just stay off the Internet entirely except MarieClaire.com, because we'd never give that stuff away—promise.