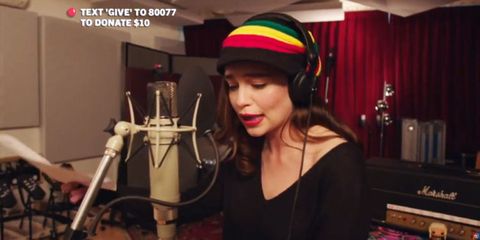 In another Red Nose Day triumph, Coldplay announced that it had written an entire Game of Thrones musical starring the original cast and including songs such as "Wildling," "Rastafarian Targaryen," and a gruesome ditty about the Red Wedding.

Too bad it is fake—though fake for charity!—because the internet would pay good money to see Jon Snow twirling a microphone on Broadway or off-off-Broadway or just in a video shot with an old Nokia. Other things we'd gladly pay to see: Jaime Lannister's ballad about his effed-up family tree, Tyrion's Motown tribute, and, duh, Daenerys's reggae number.

This content is imported from YouTube. You may be able to find the same content in another format, or you may be able to find more information, at their web site.
Chelsea Peng I'm Chelsea Peng, the assistant editor at MarieClaire.com.
This content is created and maintained by a third party, and imported onto this page to help users provide their email addresses. You may be able to find more information about this and similar content at piano.io
Advertisement - Continue Reading Below
More From Culture
It's Time To Binge Hulu's Best Documentaries
When Will 'The Crown' Season 5 Be on Netflix?
Advertisement - Continue Reading Below
'The Undoing' Season 2: Everything We Know
Cute Gift Ideas for Every Woman in Your Life
'The Undoing' Differs Sharply From the Book
'The Undoing' Is Packed With Stars
Differences Between 'The Undoing' Book and Novel
It's Been a Weird Year for 'The Bachelorette'
Did Princess Diana Really Dance to 'Uptown Girl'?
'Bachelorette' Frontrunner Brendan Is an Actor