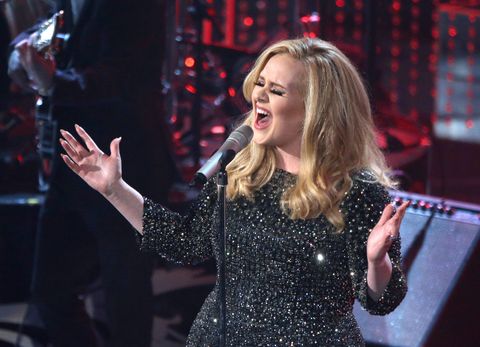 After pulling a "Kim Kardashian" by breaking the internet with "Hello," Adele and her unparalleled pipes are gracing our ears with another new song.

But this isn't just another ballad about a bloke who broke her heart. Rather, it's about  the one that deserved it all along: her current boyfriend Simon Konecki.

She unveiled the track last night during her concert at Radio City Hall in NYC, which was filmed for an upcoming NBC special.

Adele's upcoming album 25, which she promises is not a "break-up" record, comes out on Friday

Lauren Valenti Associate Web Editor I’m the associate web editor at Marie Claire.
Advertisement - Continue Reading Below
More From Culture
The Best Korean Dramas of All Time
Mainstream Movies With * A LOT * of Nudity
Advertisement - Continue Reading Below
Things Between Victoria F. and Chase Rice Got Ugly
Who Are the Women of 'The Bachelor' in 2020?
Rosalía Is the One to Watch at This Year's Grammys
Sydney From the 'Bachelor' Knows Hannah Brown
The 10 Hottest Movies on Hulu Right Now
'The Bachelor' Has Already Finished His Season
When Michelle Carter Is Expected to Walk Free
How Much Time Did Michelle Carter Get in Prison?