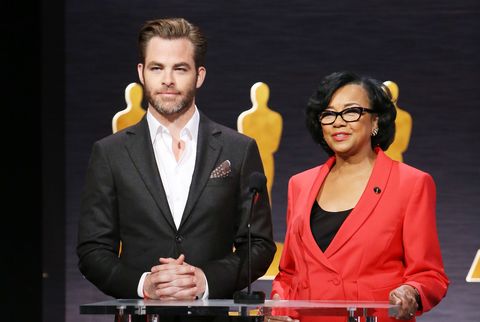 In depressingly unsurprising news, The Academy has nominated a group of entirely white actors for this year's Oscars, garnering a tremendous amount of criticism and leading to the reemergence of #OscarsSoWhite on Twitter.

While there's no doubt that the white actors nominated are talented, there were plenty of women and men of color who had stand-out performances and simply weren't recognized (hello, Michael B. Jordan). It's becoming harder and harder to rationalize this trend instead of chalking it up to institutionalized racism, and even Academy president Cheryl Boone Isaacs has expressed her disappointment at the community she oversees.

"Of course I am disappointed, but this is not to take away the greatness (of the films nominated)," she told Deadline. "This has been a great year in film, it really has across the board. You are never going to know what is going to appear on the sheet of paper until you see it."

While Cheryl does vaguely sound like she's trying to put a positive PR spin on the issue, she also admitted that the Academy's diversification efforts are moving at a snail's pace: "We have got to speed it up."

Sure, but what is it exactly that's holding the Academy back? Surely, they watched the brilliant performances of Will Smith in Concussion and Idris Elba in Beasts Of No Nation, right? It's becoming increasingly difficult to understand why these talented actors were omitted when the rest of the world can see that they're delivering the strongest performances of their careers.

Mehera Bonner Contributor Mehera Bonner is a news writer who focuses on celebrities and royals—follow her on Instagram.
This content is created and maintained by a third party, and imported onto this page to help users provide their email addresses. You may be able to find more information about this and similar content at piano.io
Advertisement - Continue Reading Below
More From Culture
Netflix's 'Selena' Cast vs. Real Life
It's Been a Weird Year for 'The Bachelorette'
Advertisement - Continue Reading Below
The 24 Best New Christmas Movies of 2020
Meet the Cast of Netflix's 'Virgin River'
Watch the Trailer for the New 'Euphoria' Special
Zac Clark Could Be a 'Bach' Frontrunner
This Guy Is a Frontrunner on 'The Bachelorette'
Will There Be a Season 3 of 'Virgin River'?
Unique Gifts for the Coffee Lover In Your Life
Want a Spooky Read? Order 'Plain Bad Heroines'