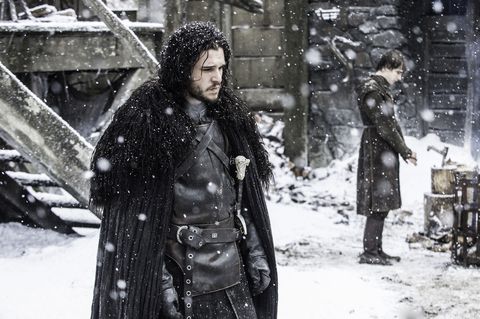 Even though the highly-anticipated premiere of Game of Thrones season 6 is more than a month away (April 24th, as if your calendar isn't already marked), HBO is still hung up on last season. Behold the best 60 seconds of your day: an epic deleted scene to get you riled up.

The scene was cut from the season's premiere episode of season 5 and features Alliser Thorne, the Master-at-Arms at Castle Black, and Tourmund Giantsbane, the then captured Wildling. The devious duo have an uneasy conversation, which sets up the Night's Watch's internal clashes about the Wildling army. As we all know, this does not bode well for Jon Snow: Thorne eventually inspires mutiny and organizes Snow's () death. But since the GOT universe likes to play with our heartstrings, Jon Snow makes several appearances in the season 6 teaser trailer.

The never-before-seen outtake is from the Game of Thrones season 5 DVD and Blu-ray set, which is out March 15th and includes more deleted scenes, commentary and so much more. Season 6 premiers on April 24th.