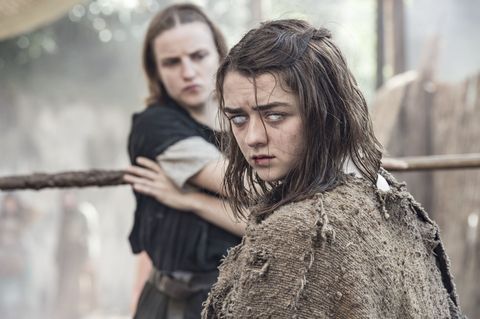 Spoilers, obviously, but why else would you have clicked? And, really, who cares what Melisandre looks like as long as she can still un-corpse-ify Jon Snow?

ICYMI, the Big Thing from Sunday night's Game of Thrones season premiere was that Melisandre is actually super old—like 200 to 300 years old, according to actress Carice van Houten in an interview with People. (Something to do with her magic necklace and probably a Mother Gothel-like deal with the devil.)

"I did six hours of makeup," Van Houten said. "It's not just one face that they glue on you. But it's worth it because of what you look like after. It was quite nice, it was like a zen practice for me, I quite enjoyed it."

So did the rest of the cast when they saw a different Melisandre from the sexy/terrifying ginger princess who wreaked havoc on Seth Meyers' baby shower, but van Houten said revealing her character's true form was actually rather emotional.

"The fact that she is so old makes everything, it makes sense now in retrospect, why she would say, 'that's just another death,' because she has an overview on a big scale, one death means nothing compared to what we're facing and that could be the end of the world. It makes the character immediately more vulnerable and sad," she said. "To make an old woman look at herself in the mirror as a young woman and then as her true age, that's quite painful."

Okay, but, like, wouldn't she feel so much better saving someone crucial to the anti-White Walker cause COUGH COUGH? Think about it.