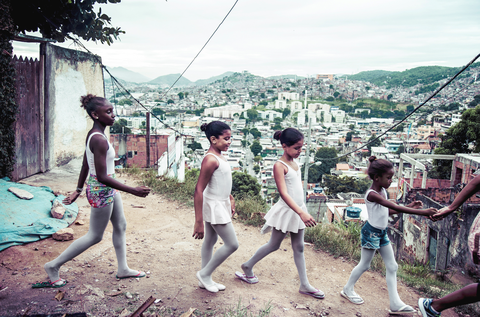 Brazilians turn wide-eyed when you tell them you've visited the Complexo do Alemão favelas in Rio de Janeiro. They know the low-income community, home to 60,000 residents, from evening news broadcasts that show drug traffickers with assault rifles and mothers shouting "Cowards!" when their children are struck by stray bullets in shoot-outs between the police and dealers.

In a quieter section of the neighborhood, Tuany Nascimento, 22, stretches on the scuffed-up blue floor of an open-air sports ring where she went to practice ballet even after she'd given up the dream of becoming a professional. "I would come alone," says Nascimento, "and always a girl or two would show up to learn what I was doing."

So she started Na Ponta dos Pés (On Our Tiptoes) in 2013, teaching three ballet classes twice a week to nearly 50 girls, ages 4 to 17, in that same sports court, where students in dirty white ballet slippers now skirt around pools of water from yesterday's rainfall.

It's a bare-bones operation: The ballet barre was nabbed from an out-of-use dance studio, and the program's only financial support has come from a small grant from a chain furniture store. The fee? Students need only bring their report cards to prove they're enrolled in school and passing all their classes.

"Classical ballet is one of the art forms that most transforms a person."

"Classical ballet is one of the art forms that most transforms a person," says Nascimento, who is studying physical education at Celso Lisboa college. "Once you are here, you have rules, you have discipline, you have challenges—all are things that you are going to find in your life. I will not have 49 ballerinas. If I have one, marvelous! But let's have 49 girls who have an educated mind and are looking for a better future, where they know they have options. The majority think: I'm going to get a job near my home, then I'll be a mother. They don't leave the walls of the community. I want to show them that the world is large and that there's a chance for everybody."