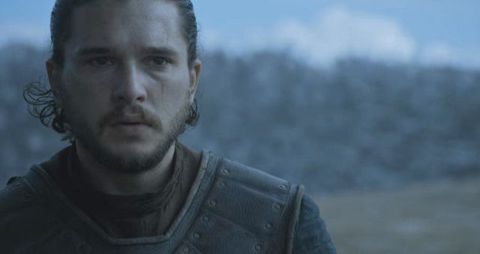 We'll probably still have to wait two more years to find out who ends up on Game of Thrones' coveted Iron Throne, but if Westeros were a democracy, it might already have a ruler. In honor of this year's U.S. Presidential election, HBO hosted a mock election of its own, inviting fans to vote on which character should rule the fictional world of Game of Thrones.

To make things even more interesting, each presidential candidate had a running mate, to serve as his or her Vice President. In case you need a refresher, the four pairs of candidates were: Jon Snow/Lyanna Mormont, Daenerys Targaryen/Tyrion Lannister, Petyr Baelish (aka Littlefinger)/Sansa Stark, and Cersei Lannister/Qyburn.

The results are in and Snow/Mormont took the election—but just barely. The race was a tight one between Jon Snow, Dany, and Littlefinger (sadly, Cersei was never really a contender).

Baelish/Stark were in the lead for the first two weeks of the election, but fell short of a win with 31 percent of the final vote. Daenerys and Tyrion faired just slightly better with 32 percent, and Jon Snow and Lyanna Mormont weren't far ahead with 35 percent. Poor Cersei and Qyburn got a pretty dismal 2 percent of the vote (obligatory shame joke here).

Of course, Jon is an okay leader, but we can only assume Lyanna will run the show behind the scenes.

HBO
Kayleigh Roberts Kayleigh Roberts is the weekend editor at Marie Claire, covering celebrity and entertainment news, from actual royals like Kate Middleton and Meghan Markle to Hollywood royalty, like Katie Holmes and Chrissy Teigen.
This content is created and maintained by a third party, and imported onto this page to help users provide their email addresses. You may be able to find more information about this and similar content at piano.io
Advertisement - Continue Reading Below
More From Culture
A Guide to the Fairies of 'Fate: The Winx Saga'
'You' Season 3 Is Adding a Menacing Character
Advertisement - Continue Reading Below
'Fate: The Winx Saga' Season 2: Everything We Know
Who Is Michelle Young on 'The Bachelor'?
Who Is the Voice on the Radio in 'WandaVision'?
Everything We Know About Matt James
How to Join Marie Claire's Virtual Book Club
Watch UCLA Gymnast Nia Dennis' Epic Floor Routine
Fans React to 'Euphoria' Special 'Part Two: Jules'
'Detransition, Baby' Is Our Feb Book Club Pick