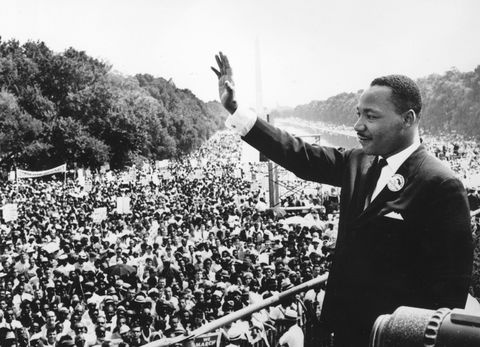 It has been nearly 50 years since the death of Martin Luther King, Jr., but his inspiring example and powerful words are as impactful and important now as ever. In recognition of MLK Day, celebrities and politicians have taken to their Twitter and Instagram accounts to honor the iconic civil rights leader's life and legacy.

"Dr. King taught us to recognize the dignity and worth of every human being," tweeted congressman John Lewis. "He was the moral compass of our nation. #IHaveADream"

Dr. Martin Luther King, Jr. was my friend, my mentor; he was like a big brother.

Dr. King taught us to recognize the dignity and worth of every human being. He was the moral compass of our nation. #IHaveADream

He marched for us. #goodtrouble pic.twitter.com/ulzC3CBAeh

He protested for us. #goodtrouble pic.twitter.com/DDkjh7USxD

He went to jail for us. #goodtrouble pic.twitter.com/saHB1WsfbV

He gave his life for us. pic.twitter.com/tKtk0fvY6J

We honor Dr. King’s legacy through service to our community and adherence to the philosophy & discipline of nonviolence #MLKDay #goodtrouble pic.twitter.com/URVlDGT2Yq

Michelle Obama included a shout-out of support for Congressman Lewis in her MLK Day note, writing, "Thinking of Dr. King and great leaders like @repjohnlewis who carry on his legacy. May their example be our call to action."

Thinking of Dr. King and great leaders like @repjohnlewis who carry on his legacy. May their example be our call to action. -mo

President-elect Donald Trump, too, shared a message on Twitter: "Celebrate Martin Luther King Day and all of the many wonderful things that he stood for. Honor him for being the great man that he was!"

Celebrate Martin Luther King Day and all of the many wonderful things that he stood for. Honor him for being the great man that he was!

While Bernie Sanders attached a call to action to his MLK tribute, reminding politicians that it is not enough to simply tweet nice things about Dr. King on his namesake holiday—if you truly believe in what he stood for, you must take action and carry out his vision.

While it's easy for politicians to say nice things about Dr. King, at the same time they are suppressing the vote. #MLKDAY

I say to politicians: If you believe in what Dr. King stood for, stop the voter suppression, allow people to participate in our democracy.

To honor Martin Luther King Jr. we must fight to carry out his bold vision. He saw the relationship between racism and economics and war. pic.twitter.com/izRzi65ln8

Many celebrities also took to their social media platforms to salute King and share their favorite photos and quotes.

Zendaya posted a video on Instagram in which she visits the spot in Washington D.C. where King delivered his famous "I Have a Dream" speech at the Civil Rights March in 1963.

Alicia Keys shared the song "Why? (The King of Love Is Dead)" by Nina Simone, which was written as a tribute to King. Keys wrote: "Why?"was written for MLK &it beautifully honors his life's work. Today more than ever I share the sentiment #MLKDAY"

"Why?"was written for MLK &it beautifully honors his life's work. Today more than ever I share the sentiment #MLKDAY https://t.co/qshzd1I9c9

We even saw a collaborative homage of sorts take place on Twitter. Fifteen stars—starting with Chance the Rapper and continuing with such prominent names as Kerry Washington, Oprah Winfrey, Jennifer Lopez and Lady Gaga—came together to each tweet a line from "I Have a Dream."

and every hill and mountain shall be made low, #IHaveADream

and the glory of the Lord shall be revealed and all flesh shall see it together."" #IHaveADream

This is our hope, and this is the faith that I go back to the South with. #IHaveADream

With this faith, we will be able to hew out of the mountain of despair a stone of hope. #IHaveADream

With this faith, we will be able to transform the jangling discords of our nation into a beautiful symphony of brotherhood. #IHaveADream

to go to jail together, to stand up for freedom together, #IHaveADream

knowing that we will be free one day. #IHaveADream

My country 'tis of thee, sweet land of liberty, of thee I sing. #IHaveADream

Land where my fathers died, land of the Pilgrim's pride, #IHaveADream

Scroll down to see more messages and tributes to Martin Luther King, Jr.

In honor of their legacy, @FLOTUS and I are joining Americans across the country in a day of service to our community here in D.C. #MLKDay

Preach M. L.K. We are reminded of your greatness! The Freedom you Fought for. You Risked everything for something greater than yourself. 🙏🏻 who will lead us Now? 🇺🇸🇺🇸🇺🇸! You Were. A King Amongst Men. 👑 @stevenkleinstudio @talibaan_sheik

Life's most persistent and urgent question is, “What are you doing for others?”— Dr. Martin Luther King, Jr. #MLKDay

"The time is always right to do what is right." Thank you Dr. King for your eternal leadership, moral challenge & inspiration #MLKDay

Like SO MANY, I am praying so hard for this country, as I pray I'm hearing the scripture,"faith without works is dead". Having faith is one thing, my "work" in wanting to see change will be taking action in what I believe in! Not being a lazy citizen! What would this great man Dr.Martin Luther King, with such a great legacy, if he were still here say? What would he do? We have come a long way, but still have so far to go! LET US NOT BE LEAD BY FEAR! BUT, move with strategy(@toureroberts) & courage! #reflectingontheKing!

Happy birthday, Dr. King. Your words are just as important today as they were when you were first began your fight for dignity, equality, tolerance and love. Thank you for still inspiring us to be our best selves. ⭐️✊🏽💜

Happy Martin Luther King day! Let's do at least one good thing for humanity today in his honor. As I listened to this I have a Dream speech today once again, I was reminded that it is completely timeless and adamantly applies to today!

Dr. Martin Luther King Jr. lived his life serving others. Melinda reflects on how to follow his example. #MLKDay https://t.co/qTlPELVQng

'I have decided to stick with love. Hate is too great a burden to bear.' - Martin Luther King, Jr.

Remembering the words of one of our nation's greatest heroes, and celebrating this day in his honor. #MartinLutherKingJr #MLKDAY pic.twitter.com/INcFUf8MU0

The dream requires action. Let us be inspired to take action. No fear good people, never fear. We will fight for freedom together #MartinLutherKingJr

The wise and powerful words of #DrMartinLutherKingJr ❤️ #MLK

Today We Celebrate You. Thankful For All You've Done. Thank You! #MLK Day.

"The arc of the moral universe is long, but it bends towards justice." -
Martin Luther King Jr. #MLKDay pic.twitter.com/g29uJdwLCR

“Our lives begin to end the day we become silent about things that matter.” — #MartinLutherKingJr #MLKDay pic.twitter.com/j3ymcEBps6

#MondayMantra "We know through painful experience that freedom is never voluntarily given by the oppressor; it must be demanded by the oppressed. Frankly, I have yet to engage in a direct action campaign that was "well timed" in the view of those who have not suffered unduly ... We must come to see ... that justice too long delayed is justice denied." • Thank you for fighting to make our American promise -- that all men, and women, were created equal -- a reality. You taught us the most important lessons. Now it's our turn to make you proud. • #MLKday #MLK #WhyIMarch #WomensMarch @womensmarch

Happy #MLKDAY. "The time is always right to do what is right." Every day is an opportunity to honor his legacy with action. Now more than ever.

When I only have the strength to crawl, this is helpful to me.

We are in a time where more love is needed in the world. Today as we remember the great #MartinLutherKingJr I send out love to everyone around me, near and far ❤❤❤ #MLKDay

#MLKJr on peaceful disobedience. Now is the time to stand up and be inspired. Watch for Alt Reich and Trump agitators acting out violently at Rally's and Marches. We are a peaceful movement, reject violence. #NonViolent

Sarah Lindig Senior Digital Editor, Special Projects Sarah Lindig is the senior digital editor, overseeing special projects for Harper's Bazaar.
Advertisement - Continue Reading Below
More From Culture
The Best Korean Dramas to Get You Hooked
87 Movies Everybody Should Watch At Least Once
Advertisement - Continue Reading Below
The Best Documentaries on Amazon Prime Right Now
Heart-Pumping Action Movies Coming Out This Year
The Best TV Shows on Hulu Right Now
The Documentaries You Can't Afford to Miss in 2020
'Killing Eve' Season 3 Review: What's Old Is New
A Super Pink Moon is Coming April 7
Pre-Order These Amazing Books Coming Out in 2020
The 8 Best Rom-Coms of 2020