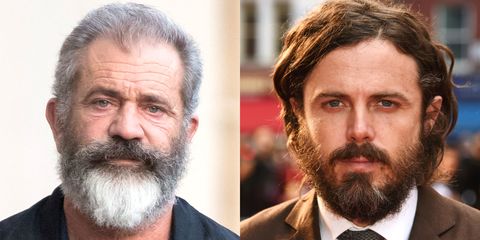 There are a lot of reasons to feel very, very good about this morning's Oscar nominations, which broke several records for diversity and recognized performers of color in every acting category. But the nominations of Mel Gibson for Best Director, and of Casey Affleck for Best Actor, left a bad taste in the mouths of many. These nominations are not just a validation of Gibson and Affleck—both of whom have checkered pasts, to say the least—but also indicate Hollywood's larger willingness to brush male misconduct under the rug in the name of "art."

Gibson has been a pariah for more than a decade, ever since he was caught on tape making a series of anti-semitic, misogynistic comments while under arrest for DUI in 2006. A domestic violence investigation was launched against the actor in 2010 following an abusive, racist tirade he left on his ex-wife Oksana Grigorieva's voicemail. And that's just the tip of the Gibson iceberg. This morning, the Academy nominated him for Best Director and garnered his movie Hacksaw Ridge with an additional five nominations.

Meanwhile, Affleck was sued in 2010 by two former co-workers from ill-fated experimental mockumentary I'm Still Here, which he directed. The film's producer Amanda White and cinematographer Magdalena Gorka filed separate lawsuits, each claiming that Affleck and other crew members had subjected them to a barrage of inappropriate sexual comments and unwanted advances. Both suits were settled out of court. This morning, the Academy nominated Affleck for Best Actor for his work as Manchester By The Sea's grief-stricken protagonist, a performance that already won him a Golden Globe earlier this month.

On the bright side, the internet made its outrage over Gibson and Affleck's nominations known with swift, delightful fervor.

Don't buy into the narrative of Hollywood giving a fuck about women when Casey Affleck and Mel Gibson are nominated. The truth is clear.

Several commentators also noted the uncomfortable parallel between these nominations and the election of President Donald Trump, who has been accused of sexual assault and harassment by multiple women.

Emma Dibdin Contributor Emma Dibdin writes about television, movies, and podcasts, with coverage including opinion essays, news posts, episodic reviews and in-depth interviews with creatives.
Advertisement - Continue Reading Below
More From Culture
The Best Cooking Shows on Netflix
The Wildest Reviews of Joe Exotic's Zoo
Advertisement - Continue Reading Below
What Happened to Doc Antle from 'Tiger King'?
Is Joe Exotic Still in Jail?
What Happened to Dillon Passage from 'Tiger King'?
Julia Louis-Dreyfus Has All the, Uh, Right Answers
Just 41 Wildly Funny 'Tiger King' Tweets
Beach Music to Get You Excited for Warm Weather
These Classic TV Shows Are Available to Stream
America Is Crushing on My Boyfriend Andrew Cuomo