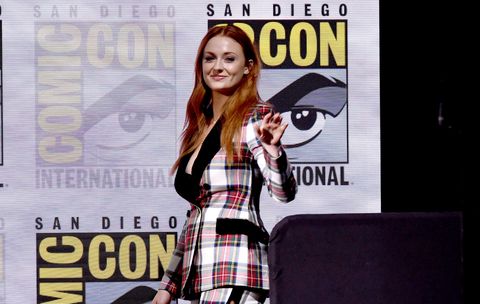 Today, several members of the Game of Thrones cast turned out for the show's highly-anticipated panel at San Diego Comic-Con. While several clues were dropped about Season 7, one particularly standout moment came when Sophie Turner, who plays Sansa Stark, fielded a question about how everything Sansa has been through has changed the character.

When panel host Kristian Nairn (who Thrones fans know better as Hodor) asked Sophie, "Does Sansa retain any of her ideas about love, marriage, and being happy, or is she now of the opinion that men are just after her for what they can get from her?"

Okay, fair enough. If you've even followed the internet headlines generated by Sansa's storyline, you know that's fair. But what Turner said next is what really caught our attention.

"She's woke now guys, she's real woke," Turner joked, adding, "She's cautious, she trusts no one—whether it be man or woman, whether a family member or not, she trusts no one and I think that's important when you play the game of thrones."

Turner's tone got very mischievous when she said "when you play the game of thrones," which is significant. The character who famously uttered that phrase was none other than Cersei Lannister herself, way back in Season 1:

After the Season 7 premiere, the internet had a collective meltdown when people made the connection between Sansa's current hairdo and Cersei's old style (not to mention that whole exchange with Jon where she all but says Cersei is her current inspiration):

Did Sophie Turner just give us all another clue that Sansa is Cersei 2.0 this season? Because it sure seems like it.

This content is created and maintained by a third party, and imported onto this page to help users provide their email addresses. You may be able to find more information about this and similar content at piano.io
Advertisement - Continue Reading Below
More From Culture
Meet the Cast of Katie's 'Bachelorette' Season
Blake Moynes Has a Thing For 'Bachelorette' Leads
Advertisement - Continue Reading Below
'Skye Falling' Should Be on Your Summer TBR List
What Makes an Olympic Moment?
Team USA Fencers Protested Their Teammate
Hang On, What's "ROC" at the Olympics?
Suni Lee Just Scooped Up Gold in Tokyo
Movies Everybody Should Watch At Least Once
'Virgin River' Season 4: Everything We Know
'Love Is Blind' Season 2 Is Coming!