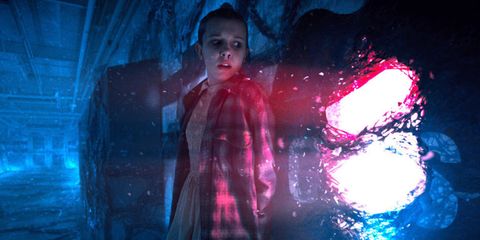 Netflix rocked the internet this weekend when it dropped new footage from Season 2 of Stranger Things. The trailer was full of little hints about the upcoming season, but it also left fans with more questions than answers (duh, this is Stranger Things after all).

For example, you may have noticed that Eleven's hair is still styled in her iconic buzzcut in the trailer:

But, fans of the show know that actress Millie Bobby Brown, who plays Eleven, has been growing her hair out since filming wrapped on Season 1—and it's actually getting pretty long again (compared to a buzzcut, at least):

Since we know filming for Season 2 ran from about November 2016-January 2017, something about the footage and Millie's real-life hair didn't add up—so we asked Stranger Things executive producer and director Shawn Levy to explain. The thing you probably didn't notice in the trailer? Eleven's buzzcut isn't real.

"We couldn't be so heartless as to make her shave her head all over again," he explained. "So because Millie's hair was longer, and some of Season 2 needed that same buzzcut, we put all of her hair under a wig and then used visual effects to help make it look like a perfect match to the end of Season 1. So a combination of wig and VFX."

Important note: He said "some of Season 2 needed that same buzzcut." So thanks for the (teeny, tiny) spoiler, Levy: Eleven's hair will grown in Season 2.