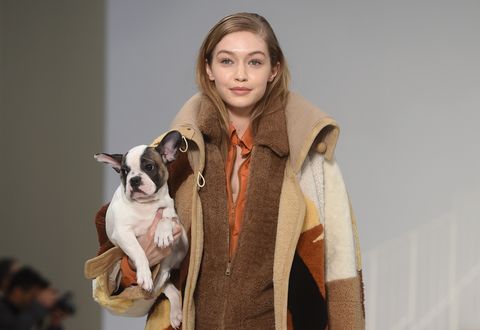 In the past few years, many fashion houses have started switching from showing the traditional ready-to-wear seasons at fashion week to a "see now, buy now" model, where items are available straight off the runway instead of waiting a few months to hit stores. This idea makes sense to me, but I've never had a particular feeling about it, until today, when Tod's showed its fall 2018 show in Milan, because models carried puppies down the runway and I SEE NOW, WANT TO BUY RIGHT VERY NOW!

Not every model was blessed with a dog—Gigi's sister, Bella, walked the show sans puppy:

Which...literally how could you walk an entire runway knowing your sister was getting to do it with THIS GUY:

LOOK AT THAT FACE!
Getty Images

Anyway, I have never wanted something to be off a runway and in my hands more than the guy Gigi is holding—mostly because I have a long, semi-pathetic history of desperately wanting a French Bulldog, or, as I like to call them, Potatoes™, but again, because HOW CAN YOU RESIST THIS:

Give him to meeeee.
Getty Images

While we're at it, I'd also take that jacket, gorgeous bag, and cozy zip-up Gigi's wearing, but, you know.

Sally Holmes Digital Director Sally is the Digital Director of MarieClaire.com where she oversees coverage of all the things the Marie Claire reader wants to know about, including politics, beauty, fashion, celebs, and Prince Harry's facial hair.
Advertisement - Continue Reading Below
More From Fashion
Meghan May Have Casually Reworn a 'Suits' Costume
The Emerging ﻿Fashion Brands to Keep Your Eye On
Advertisement - Continue Reading Below
Rihanna's Go-to Airport Look: Heels and Sweats
Kate Middleton's Eternity Ring Is Back In Stock
The Net-a-Porter Sale Section Is Very Good
Meghan Markle Wears Necklace of Archie's Star Sign
Black Turtleneck Outfits to Pin to Your Mood Board
Everlane's New Leggings Already Have a Waitlist
Hot Date Night Outfits for the Cold
Found: A Cute Winter Jacket That's Under $60