The fashion at the 75th Venice Film Festival is heating up. Celebrities are arriving in Italy to promote their films and bringing their best designer gowns for the occasion. One star in particular has been dominating the red carpet: Emma Stone. On Thursday, the actress arrived to a screening of her new film, The Favourite, while wearing a mesmerizing semi-sheer embroidered dress.

The 28-year-old star looked radiant in her customized Louis Vuitton gown, which was originally just a sheer jacket from the resort 2019 collection. To keep things modest on the red carpet, Stone wore nude undergarments (or perhaps a bodysuit?) under the sheer ensemble and finished the look with a pair of metallic strappy heels. She swept her hair up and off her shoulders, opting for some loose waves to frame her face.

Stone's an ambassador for Louis Vuitton, first repping their handbags, and now, most recently, appearing in the luxury house's first fragrance film campaign. It's no surprise then that the actress chose to wear the label to one of the biggest film festivals of the year. (The VFF is considered one of the "big threes," alongside the Cannes Film Festival and the Berlin International Film Festival.)

Ahead, see a photo of Stone's original jacket-turned-dress, then prepare to obsess over her stunning red carpet snaps. 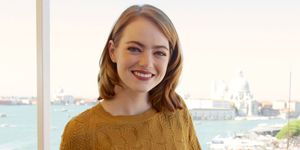 Emma Stone on Ryan Gosling's Snacking Habit
Marina Liao Marina Liao is the fashion news editor at MarieClaire.com, where she covers celebrity style (from Meghan Markle to Katie Holmes), fashion trends, and shopping advice, plus conducts original interviews with industry insiders.
This content is created and maintained by a third party, and imported onto this page to help users provide their email addresses. You may be able to find more information about this and similar content at piano.io
Advertisement - Continue Reading Below
More From Fashion
Spring 2021's Best Trends: Bras, Cutouts, Florals
Leather Leggings Are Better Than Jeans, Hands Down
Advertisement - Continue Reading Below
40 White Elephant Gifts You’ll Want to Steal
Princess Charlene of Monaco's Top Looks
Cozy Sweaters That Conjure Up Fireplace Vibes
The Shoe Trends of Winter 2020
Key Fashion Trends to Know for Fall 2020
How to Wear Chanel Pumps
The Most Controversial First Lady Fashion Moments
Your Favorite Celebs in Gloriously ﻿'80s Fashion