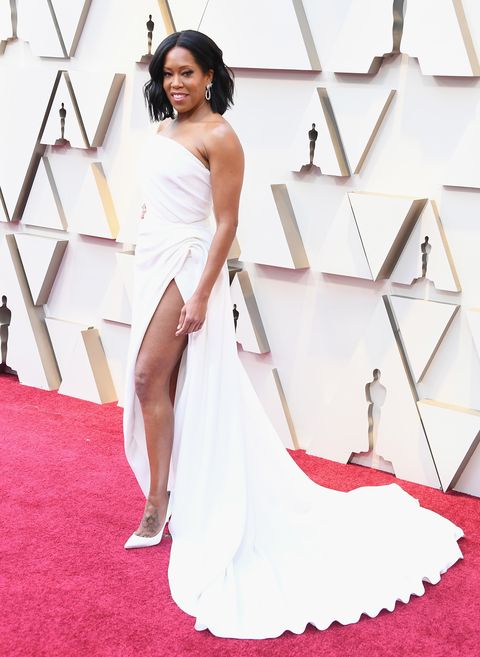 Update: Regina King won not only the highest, most gorgeous slit of the night, but also an actual Oscar—her first.

Original post: Regina King just walked the Academy Awards red carpet dressed to win. The actress, nominated for Best Actress in a Supporting Role for her turn in If Beale Street Could Talk (surprisingly, her first Oscar nom!), chose a stunning white Oscar de la Renta gown that is every single level of WOW. The column gown features a narrow sequined layer at the top with a beautiful bodice that gathers at the waist where it meets a magnificent slit that is most accurately described as lower-hip-high rather than merely thigh-high.

She isn't here to play, and why would she be? It's Oscar night and she's REGINA KING.

King has some steep competition in the Best Actress in a Supporting Role category. She's up against Amy Adams for Vice, Emma Stone for The Favourite, Rachel Weisz for The Favourite, and Marina De Tavira for Roma, but watching her on the red carpet, King doesn't look one bit nervous—in fact, she looks like the queen of the red carpet in the ultimate lewk. Honestly, I want to wear this dress to my wedding, to my best friend's wedding, to my birthday party, to my next doctor's appointment.... I'd wear it anywhere and everywhere, it's so. good. But obviously I'd require someone to hold the train for me, just like Regina, because that's the kind of mood this dress commands (also, it's quite a train, so it seems pretty necessary!).

Really, I'm just so here for all these pictures of various men holding Regina King's train:

But seriously, the dress is incredible and Regina looks like the icon she is:

Good luck tonight, Regina—I hope we get to see that killer dress on stage!

Related Story
These 2019 Oscars Beauty Looks Are Perfection
Sally Holmes Digital Director Sally is the Digital Director of MarieClaire.com where she oversees coverage of all the things the Marie Claire reader wants to know about, including politics, beauty, fashion, celebs, and Prince Harry's facial hair.
Advertisement - Continue Reading Below
More From The Oscars 2020
Twitter Is Livid Over J.Lo Not Getting Oscar Nom
Wells Adams and Sarah Hyland at the Oscars
Advertisement - Continue Reading Below
Bradley Cooper's Ex-Wife Comments on Gaga Drama
Bradley Cooper & Irina Shayk's Body Language
Did Bradley Cooper Skip the Oscars After-Party?
Ciara Debuts a Gorgeous Bob With Wispy Bangs
Kendall Jenner's Oscars Dress Was Nearly-Naked
Priyanka Chopra and Nick Jonas at the Oscars Party
Angela Bassett, We Are Not Worthy
The Most Awkward Moments from the 2019 Oscars