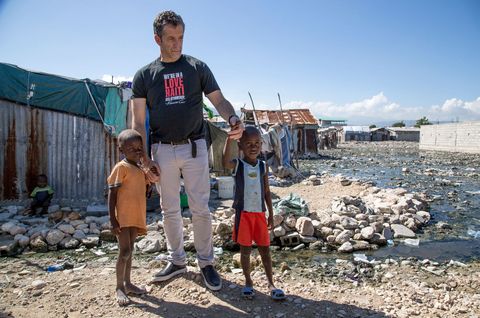 Kenneth Cole is a problem solver. In 1982, when the designer didn't have the means to rent a fancy showroom to launch his footwear brand, he improvised by changing the label's name to Kenneth Cole Productions Inc., renting a trailer, and obtaining a permit to park it on the streets of Midtown Manhattan by masquerading as a documentary film crew. (He went on to sell 40,000 pairs of shoes in three days.)

But that's small stuff compared with the problems Cole has been addressing in Haiti since the disastrous 7.0-magnitude earthquake struck in 2010. The designer and longtime amfAR chair responded by organizing shoe drives in his stores, donating nearly 10,000 pairs to those in need. He also funded the Kenneth Cole Haiti Health Center in 2011, which operates out of St. Mary's Hospital in the impoverished Cité Soleil area.

Last year, the label launched its Look Good, For Good campaign, asking people to share on social media how they were helping their communities. The nine winners with the most impactful submissions—mentoring young girls, serving food to those in need—accompanied Cole on a trip to Haiti in November, where they toured the health center and prepared meals for a nearby orphanage. "Since my last visit, in 2011, tent cities had been replaced by permanent housing, and streets are now passable," says Cole. "Things have come a long way."

This month, which marks five years since the devastating quake, the designer has collaborated with nonprofit REBUILD Globally on two limited-edition styles of sandals that Haitian artisans handcrafted from recycled tires to boost the local economy. "I've realized that people come to the brand not just for the products we make, but because of what we stand for," he says. A fair point, since making a difference never goes out of fashion.

Haitians uprooted by the 2010 earthquake are moving into newly painted houses on the mountainside near Pétionville.
Christoper Yoham
While in Haiti, Cole spontaneously designed two styles of sandal with REBUILD.
Christopher Yoham
The health center is accessible to more than 1.5 million people.
Christopher Yoham

This content is created and maintained by a third party, and imported onto this page to help users provide their email addresses. You may be able to find more information about this and similar content at piano.io
Advertisement - Continue Reading Below
More From Fashion
Found: Long Pendant Necklaces You'll Wear Forever
What Joey Wölffer Wears to Work
Advertisement - Continue Reading Below
The Best Watches Seen at Watches & Wonders 2021
Madewell's Spring Sale Is Giving Me Life
How to Make Biker Shorts Fashun
Fine, Rihanna, I'll Buy a Leather Blazer Too
Bella Hadid Wore Low-Rise Von Dutch Jeans
These Celeb-Loved Leggings Are on Super Sale
Small Business Spotlight: Pura Utz
Meghan Markle's Go-To Sunglasses Are in Stock