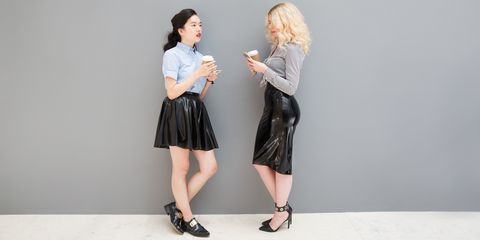 I have had a lot of dumb ideas—traipsing around in a red-carpet gown for a week, watching Sex and the City for the first time, mixing a bunch of lipsticks together to match five uber-lipsticks—but this has got to be the worst. By far.

As with certain current events, it all started with Taylor Swift. After the video for "Bad Blood" was released and I read about from whence the wardrobe department sourced those slinky tops, I was like, "Pssssshh. You know what would be harder than wearing bondage to fire missile launchers at your enemies? Wearing bondage to work." Then I immediately regretted it, because my boss was like "YES YOU SHOULD TRY IT."

Then I regretted it more when I checked the forecast and saw temperatures in the 90s.

So that I would not suffer alone/more of the MarieClaire.com team could suffer together, my editor roped Lauren Valenti into joining me on the photo-shoot part of this journey of near-constant discomfort. [Editor's note: MWAHAHAHHAHAHAA.] We went on Syren.com for authenticity and picked out enough rubber to wallpaper Christian Grey's playroom twice over.

When you make the grave mistake of doing a fetish-clothing story in July, you receive a free education in the laws of fluid dynamics. The sweat doesn't absorb then dry like it does when you wear other fabrics—it collects, traveling in sheets like those that circulate along the walls of Slurpee machines or the ones they have at Shake Shack that stir lemonade so the pulp doesn't settle. I learned this after walking 30 blocks in a racer-front latex crop top and almost keeling over from heatstroke/dehydration because 80 percent of the liquid in my body had pooled on my back.

This is me trying not to melt. Top, Syren; jacket, Nasty Gal; jeans, H&M.

Besides the problem of releasing the equivalent of Victoria Falls every time you peel your top away from your skin, there's the noise—a creak when you walk, a wet-sounding squelch when you uncross your legs—and the smell, which lingers for approximately two days after you've unrolled that cursed jet-black sausage casing from your talc-dusted limbs for the day. (The baby powder is supposed to reduce the friction so that it only takes 15 minutes to put on a catsuit instead of 30. This is not an exaggeration.)

With the excessive sweating and the squeaking and the claustrophobia of stretching an inches-wide shirt opening to fit over your abnormally large head, I can't say *I* personally find latex sexy, which made it much easier to wear in our admittedly anything-goes office. IRL, too, nobody really reacted, probably because 1) this is New York, and 2) I was so sweaty they were scared striking up a conversation might send me into cardiac arrest.

There's something awesomely scary about this. I would do whatever she says. Corset, Syren; dress, Aritzia; shoes, Stuart Weitzman The Excite Bootie.

This time, I'm okay with not being approached. Latex, by nature, is insular—it literally sucks everything in—and pulling it off also depends on the interior. I'm not suggesting you repeat this challenge in your own workplace, but from my own experience, all you would need to make it, or any other risky outfit, a success is some confidence. But who knows? If you *were* to try it, you might like how it made you lose most of your water weight in the process.

Chelsea Peng I'm Chelsea Peng, the assistant editor at MarieClaire.com.
Advertisement - Continue Reading Below
More From Fashion
Behold: The Sexiest Looks at the 2020 Grammys
The Best Red Carpet Looks at the 2020 Grammys
Advertisement - Continue Reading Below
Shop Kate Middleton's Personalized Charm Necklace
PSA: Anthropologie Is Having a Sale All Weekend
Treat Yourself to These Pretty Lingerie Pieces
Doutzen Kroes Goes Behind the Scenes at Dior
Louis Vuitton Unveils Its Spooky Pre-Fall Lookbook
Meghan Markle's $65 Sunglasses Have Been Restocked
The Best Work-Appropriate Pieces Under $130
These Are the Best Work-to-Weddings Pumps