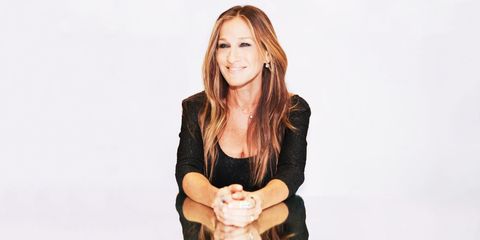 When you're sitting across from Sarah Jessica Park inside the Bloomingdale's flagship store on 59th street, it occurs to you that you're going tête-à-tête with one New York institution inside another.

A born-and-raised local, Parker spent countless hours on the corner of the world-famous department store, waiting for the crosstown bus and staring dreamily into their legendary store windows. To her, their signature brown bag represented everything from back-to-school clothing shop to having first dibs on a got-to-have-it trend. "I stood in line and waited for underwear when the Calvin Klein underwear came to Bloomingdale's in the early '80s," she told us.

SJP in the
Getty Images

Considering what a hallmark haunt it was for a wide-eyed SJP growing up, the irony is not lost on us that, a few decades later (boasting a whole lotta fame, style icon status, and many a Golden Globe adorning her mantle) that the actress should find herself quite literally perched atop the iconic Bloomingdales marquee earlier this summer. The not-so-casual occasion? Shooting a campaign for her SJP Collection, which now, to the delight of many a shoelorn New York gal, is available at Bloomies with prime real estate on the store's 2nd floor. True to charming form, Parker is genuinely humbled by the whole thing.

"The fact that we have real, realistic space, in Bloomingdales, at 59th and Lex, and that you can come up that escalator and find us on shoes on 2…We have to live up to it and be deserving of it," she said.

And having swooned over her colorful, stem-transforming designs since the moment she launched the brand in 2014, we can say with complete certainty—she's got nothing to worry about. Not to mention, at the time of our interview, had flocks of adoring fans cooling their fresh-out-of-the-box SJP Collection heels in anticipation of meeting her at an in-store event.

Heard we were running out of shoes. Good thing I came prepared. This table is full of my personal shoes. Custom #SJPcollection shoes made just for me. Pulled from my closet at 8am this morning. All size 37. Go see Heather on the shoe floor for assistance. She's amazing. X, Sj

In fact, it was such pandemonium that her collection began selling out within the first few hours of the event—and Parker herself had to pull a few custom pairs straight from her own closet (AKA shoe nirvana). We're coming for you, lucky size-seveners.

As we spoke, she donned the shimmering silver pump she wore on her Bloomingdale's sign perch, her Naomi style in Scintillate. And it's worth noting that she paired them, much like her Sex and the City alter ego Carrie Bradshaw would, with a classic LBD worn and an exposed-yet-elegant lacey back bra (see her Inspector Gadget-themed getting ready 'gram below).

Go Go gadget. Third and fourth hand. Zipping up for my visit to @bloomingdales 59th Street. Any questions, refer to @sjpcollection. X, sj

We've said before that Parker is essentially winning Instagram with her clever, yet candid posts—and in addition to her zipper 'gram, before our meeting she shared a video of her—brace yourself—hailing a cab. We couldn't help but wonder...was this her response to Gothamist's recent investigation: Does Sarah Jessica Parker Really Love Subways, Traffic, Hailing Cabs? When we asked her about her passion for public transportation, particularly the subway where she's most often sighted, it was clear it wasn't any kind of statement—it was just her being the New Yorker she's always been.

"The subway is still the fastest way to get around town," she explained. "It's still the best way to just read. You know, because I still think of my Blackberry as not functioning underground even though there are places that I see emails pop up, to me it's still a place to read a book. It's still the place to stare at people, to learn, to watch, to kind of be hypnotized by what's happening underground."

And if you are hoping to "casually" spot Parker in her element, perhaps reading Faters and Furies by Lauren Groff on the E train, there's no time like the present, as she says it's the only way to get around with "the Pope visiting and the UN in session." Just make sure your shoe game is up to par...

Caught on film by Splash News! Heading to the theater via the E train wearing my violet Alyssa's. Their 1st night out! April 9th 2014. X, sj

Lauren Valenti Associate Web Editor I’m the associate web editor at Marie Claire.
Advertisement - Continue Reading Below
More From Fashion
Treat Yourself to These Pretty Lingerie Pieces
Doutzen Kroes Goes Behind the Scenes at Dior
Advertisement - Continue Reading Below
Louis Vuitton Unveils Its Spooky Pre-Fall Lookbook
Meghan Markle's $65 Sunglasses Have Been Restocked
The Best Work-Appropriate Pieces Under $130
These Are the Best Work-to-Weddings Pumps
I Need Kate Middleton's Leopard Print Skirt
North West Inspires Me to Dress Better
The Swimsuit Trends to Invest In for Summer
The Most Stunning Looks of Couture Week