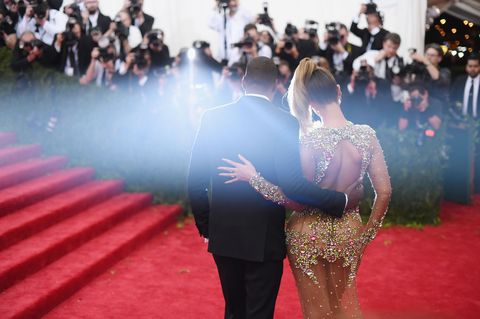 Only seven more shopping days until the Met Gala, otherwise known as the Fashion People Oscars! You know what that means? All the celebrities! Unlimited selfies! Looking down at your 5-foot hand-stitched train in the Petrie Court! Here, read our wish list for Manus x Machina, because it's basically Christmas anyway.

And a rose gold Macbook as a fascinator. What? Apple's a partner.

As in you snap the exact same photo as 39,485 other Met visitors so your followers know you went, but everyone still likes it anyway because *culture.*

The Tin Man, Bender from Futurama, Terminator, a baked potato. I could keep going.

4. Beyoncé arrives not at the 11th hour for once.

Maybe triumphant in sheer Givenchy (grant us the serenity to accept the things we cannot change). Maybe emphatically, symbolically alone?

5. Kanye attends in a DIY suit spun from silkworms he spent months raising himself.

Because that is the near-antithesis of this year's theme, but at least he's got the "Manus" part covered. Or he could just wear Yeezy—it's pre-moth-eaten anyway.

7. The attendees actually take the theme seriously and try their hardest to interpret it without getting caught in the "But what if it doesn't look pretty?" trap

They go for it, and we are dazzled.