Today's Top Stories
1
Kathryn Garcia: It's Time to Step Up or Shut Up
2
Listen to the Best New Love Songs of 2021 (So Far)
3
Pore-Cleaning Devices for Playing Dermatologist
4
The Black-Owned Lingerie Brands Changing the Game
5
Everybody Loves Annie
Edward BerthelotGetty Images

Heat waves are imminent, but before you know it, you'll be packing away your sundresses and summer sandals to make room for chunky sweaters and over-the-knee boots. But do you need to ship your cream-colored skirts and ivory pants off to storage? Yes, we're referring to the age-old question, "Can I wear white after Labor Day?" The short answer: Yes! In fact, the story behind this arbitrary dress code is unconvincingly feeble.

The history: In the late 19th century—long before you could wear jeans to a Michelin-starred restaurant—the society ladies were engaged in an invisible battle with the nouveau riche, one that could only be won by the subtle manipulation of fashion.

The "you can't wear white after Labor Day," rule was created to separate the old money elitists from the new money group. "It [was] insiders trying to keep other people out," according to Valerie Steele, director of the Museum at the Fashion Institute of Technology, in an interview with Time, "and outsiders trying to climb in by proving they know the rules."

Coco Chanel in 1969, sticking it to those 19th-century mean girls.
Roland SchoorGetty Images

For those who had money and could leave the city during warmer months, white was considered vacation attire. "If you look at any photograph of any city in America in the 1930s, you'll see people in dark clothes," Charlie Scheips, author of American Fashion, has said. Meanwhile, white linen suits and Panama hats were considered the "look of leisure."

Some etiquette authorities like Judith Martin, rebuff this class theory, however, saying, "There are always people who want to attribute everything in etiquette to snobbery. There were many little rules that people did dream up in order to annoy those from whom they wished to disassociate themselves. But I do not believe this is one of them."

The true reason could be much simpler: After Labor Day, the first Monday of September, became a federal holiday in 1894, it came to mark the end of summer. Vacationers packed away their breezy white dresses and linen button-downs in favor of darker-hued clothing, like navy suits and gray sweaters. "There used to be a much clearer sense of re-entry," explained Steele. "You're back in the city, back at school, back doing whatever you're doing in the fall—and so you have a new wardrobe."

Regardless of how this subjective rule really came about, no one in 2020 should feel the need to follow it. (I'm a fashion editor and I wear white year round, thankyouverymuch.)

Ahead, shop some white pieces to wear on or after Labor Day Weekend—you can do whatever you please. 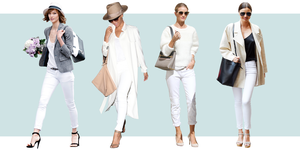 How to Style White Jeans
This content is created and maintained by a third party, and imported onto this page to help users provide their email addresses. You may be able to find more information about this and similar content at piano.io
Advertisement - Continue Reading Below
More From The Hottest Summer Fashion in 2021
What We're Wearing on Our Summer Escapes
The Summer 2021 Trends You'll See Everywhere
Advertisement - Continue Reading Below
The Boldest, Buzziest Swimwear Brands of 2021
The Swimwear Trends to Expect in Summer 2021
Straight-Leg Jeans We Love
You'll Ace These Tennis Outfits
Our Favorite Summertime Pajamas
The Dreamiest Tie-Dye Swimwear for Summer 2021
Comfy and Stylish Sandals to Walk a Mile In
Meet the Shoes You'll Live In This Summer