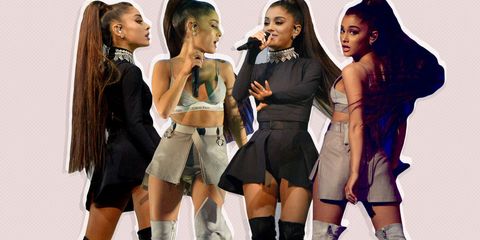 She couldn't have predicted exactly how relevant Dangerous Woman would become, but now, in the face of forces that would rather you sit down and shut up, Ariana Grande's owning-your-sexuality anthems are more relevant than ever. With the eponymous tour just begun, we sat down with Bryan Hearns, costume designer and '90s wunderkind, to talk Grande evolving from her cat-ears-circle-skirt past, reimagining the early aughts, and why zippers are a pop star's best friend.

On making the familiar strange: "The way the show's laid out, it's a story with five sections. The first is the introduction, and it has a look that's very familiar to Ariana fans. But we updated it by making it more chic—I put my spin on it by adding my design elements, which are hardware, leather, strapping detail, and chain. Super '90s and early 2000s, very TLC—everything's kind of oversize but still fitted to some parts of her body."

On designing complicated-looking clothes that have to come off in seconds: "You have to think about functionality—everything kind of looks like there are belts everywhere. There's a lot going on, but it's usually one zip in the back, super quick in and out. And the shoes are all reinforced, because you don't want a heel to break. She's the only person who can dance in 6-inch heels."

On what a Dangerous Woman looks like: "I definitely wanted to make sure the clothes are a statement on the stage and that the girl feels powerful in them. And we still want to hone in on her womanliness. [Grande href='https://www.marieclaire.com/celebrity/news/a16728/ariana-grande-shuts-down-sexist-interview/' target='_blank">sexism really went into the design too, that kind of personal strength. A lot of the clothes guys could wear too. They\'re almost unisex, especially the jackets. It\'s especially important now with what\'s going on—there are so many girls who come to the show, so you want to make sure they know that you can be your own person and be powerful and feel good."

On the true-life fairytale that is the story of his getting the gig: "The biggest surprise was for sure the opening look, just because I wasn't told to do anything for that, and then they didn't have anything to wear last-minute. They flew me out, and I put it together. Literally, it was finished the day before the show. She loved it, and it happened to be the first look she wore!"

On redoing the '90s...as a child of the '90s: "It's very interesting, especially because I was born in 1990. The Christina [Aguilera] look [that he made for Kylie Jenner!] was for sure something I grew up with, so it's really interesting that people are revisiting it so soon. I thought it was going to be at least another five, 10 years before that stuff came back. When I lived through it, I didn't like it as much as I do now. Now that everyone is really into fashion, everything is more of a polished version of what it was. It's very thought-out, not just kind of thrown on. People also attribute it to personal style nowadays, versus then, when everyone wore the same thing."

On his collection, out the beginning of March: "It definitely has elements of the early 2000s, but I still think it's pretty modern in a sense. The idea is the Tommy Hilfiger girl gone bad: very preppy, but if a punk girl only had preppy clothes to wear."

On making VPL re-happen: "I kind of want to revisit...you know when before, girls would wear the low-rise [jeans] and then they'd have their thongs sticking out? That was kind of fun. And I want to see logo-mania even more. Once the new designer goes for Versace, I know we're going to see the logo everywhere. I hope it's Riccardo Tisci."

Chelsea Peng I'm Chelsea Peng, the assistant editor at MarieClaire.com.
This content is created and maintained by a third party, and imported onto this page to help users provide their email addresses. You may be able to find more information about this and similar content at piano.io
Advertisement - Continue Reading Below
More From Fashion
Is There Any Outfit Zendaya Can't Pull Off?
The Best Loose Pants (That Aren't Sweats)
Advertisement - Continue Reading Below
Nordstrom Wins Best Cyber Monday Sale of 2020
Savage X's December Collection Is Ice Cold
This Tech Exec's WFH Outfits Go Beyond the Hoodie
Failsafe Gift Ideas for Everyone on Your List
Snag Some Adorable/Sexy New Lingerie (You Pick!)
Le Specs Are Up to 70 Percent Off for Black Friday
The Bright Red Sweater That's Actually a Neutral
Prepare Yourself for Everlane's Black Friday Sale