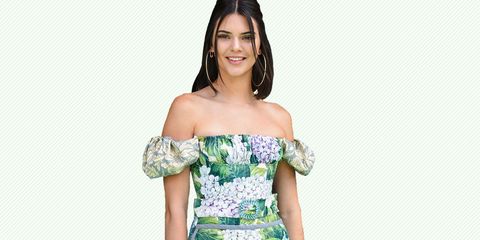 Summertime and the livin' is easy...except when you merry-go-round yourself into a sartorial spiral because a sundress plus sandals is just so boring. But what else can you wear that a) doesn't cling to your legs or b) isn't pants? How do you make the over-familiar even somewhat strange?

In comes Kendall Jenner with an, if not the, answer, given in three parts at Saturday's Tenth Annual Veuve Clicquot Polo Classic, an event where celebrities day-drink outdoors while watching dudes swing mallets way too close to horses' heads. Let's break it down, shall we?

Part I: The Bigger the Hoops

If Marni Senofonte had put her in pearls—not that she ever would, outside of the non-sorority, Sophie Bille Brahe kind—this would be a completely different sort of story. (But again, not that we would ever do that.) But because Senofonte stayed consistent with the neo-'90s vibe she's been cultivating for KJ, that floral, puff-sleeve Dolce & Gabbana dress (similar here) gets a bit of edge, like how a generous pinch of salt or squeeze of lemon cuts through a dessert's one-note taste of sugar.

Part II: The Higher the Boot

Curveball! The ever-popular nude sandal sometimes has the unfortunate effect of making the wearer look like she is standing on her bare tiptoes; modish, pointed Stuart Weitzman boots, instead, ground a frock so airy it might otherwise flutter away. 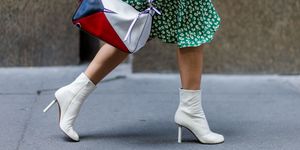 Part III: The Smaller the Hair

The worst possible decision Jen Atkin could have made here would've been to do pageant waves. (For the third time: Not that she would ever.) Mercifully, those have fallen mostly out of favor, dragged under by the beachy/bedhead-y/wavy with straight ends. That would've been fine, because when the accompanying fashion is more involved or "girly," it's best to think straight over round, angular over curved. Wispies don't hurt either.

Chelsea Peng I'm Chelsea Peng, the assistant editor at MarieClaire.com.
This content is created and maintained by a third party, and imported onto this page to help users provide their email addresses. You may be able to find more information about this and similar content at piano.io
Advertisement - Continue Reading Below
More From Fashion
The Biggest Jewelry Trends for Spring 2021
Leather Skirts Are an Edgy Wardrobe Must-Have
Advertisement - Continue Reading Below
Back to Basics: How to Build a Minimalist Wardrobe
Michelle Obama Stuns at Biden-Harris Inauguration
Jaclyn Rothenberg Pursues Pantsuits In Every Color
What to Buy From Madewell's Secret Stock Sale
What Biden's Family Wore on Inauguration Night
Your Girlfriend Will Approve of These Chic Gifts
The Softest, Coziest, Warmest Socks You Can Buy
Why Everyone Wore Monochrome to the Inauguration