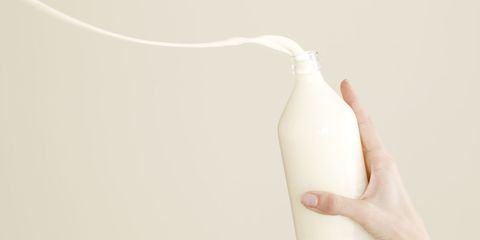 How's this for a #TBT: Remember the "Got Milk?" era? Those were the days when you couldn't flip the pages of your favorite magazine without seeing a celeb rocking a milk mustache and waxing poetic about the drink's role in their success. Fast-forward over twenty years and just as the Milk Processor Education Program has phased out the iconic campaign, Americans have adopted a "milk and cookies—hold the milk" approach to our diets as well.

What was once a go-to source of vitamin D and calcium has since been overrun by other dairy and non-dairy alternatives with arguably higher nutritional values and lower fat and sugar contents. Soy and almond milk have become almost more standard coffee additives than the classic cream and sugar, as both are cholesterol and lactose-free and contain less calories than whole milk. Meanwhile, goat's milk has made its way from the farmer's market to the supermarket and is praised for its higher levels of calcium, magnesium, and vitamin C.

But it's the latest by-product of the anti-cow's milk generation that's proving to be a frontrunner in this great dairy debate: Camel's milk. Though it seems bizarre, camel's milk has been on the breakfast table in the Middle East for centuries, and today, companies are bottling the salty, antioxidant-rich beverage stateside. "Back home [in Saudi Arabia], people know that camel's milk is very healthy and medicinal," says Walid Abdul-Wahab founder and CEO of camel milk distributor Desert Farms.

"Nomads have even spoken highly of the nutritional values of camel's milk as they would move throughout the desert surviving off the milk and dates solely without any loss of health." Intrigued (and skeptical) of this new superfood, we consulted Abdul-Wahab and Virginia-based dietician and functional nutritionist Nour Zibdeh to learn more. And surprisingly, our side eyes turned to wide eyes at the results when we pitted camel's milk against other milk products on the market.

"Non-dairy products like almond, coconut, and soy milk are beneficial for people who cannot tolerate dairy, but there are a lot of synthetic ingredients that go in commercial production," says Zibdeh.

She adds that non-dairy milks can be considerable alternatives when produced naturally, but still will not have as much protein or calcium as camel's milk. Abdul-Wahab agrees.

"The issue with these alternatives on the market is that they are part of a trend, therefore do not have years of research to prove their benefits," he says. "Rice milk was once popular but has been found to have high levels of arsenic, and soy milk is in decline because it increases levels of testosterone. These products are very highly processed—whereas camel's milk is natural and has been consumed for thousands of years in tribes from around the world from Mongolia, to Russia, to South Africa, and beyond, and many studies have proven why it's beneficial."

According to Zibdeh, camel's milk is 10 times higher in iron, and three times higher in vitamin C than cow's milk. "Camel's milk also has more potassium, magnesium, copper, sodium, and zinc than cow's milk, as well as antimicrobial proteins that boost the immune system to help fight bacteria and viruses," she says. At Desert Farms, Abdul-Wahab also makes sure to curb the use of hormones in his camel's milk unlike what you might find in most cow's milk on the market.

"Cows in the U.S. have been injected with growth hormones and bovine chemicals to make it produce more milk," he says. "But our camels are 100 percent organic. We don't give them antibiotics or GMOs, so it's a very clean, pure breed of milk."

When asked to address the looming question of why Americans have turned their backs on cow's milk, Zibdeh and Abdul-Wahab have a one-word hypothesis—allergies. "Cow's milk has two types of proteins called casein and whey," explains Zibdeh, adding that some are allergic to these proteins. "It also has a high content of lactose, and those who are lactose-intolerant don't have the enzyme needed to digest this sugar." Goat's milk shares these properties, making it difficult to digest for anyone with these allergies. "Camel's milk has a different structure, with only the A2 beta-casein," says Abdul-Wahab. "That's why even those with dairy allergies can consume camel's milk without having any digestion issues." Abdul-Wahab adds that camel's milk has the lowest level of lactose of any mammal and says that studies have proven it to be the closest milk to mothers' milk.

Additionally, a study in the Journal of Medicinal Food found that drinking 500ml of camel's milk per day could boost insulin levels in those with type I diabetes. "Camel's milk may have insulin-like molecules, reducing the need for insulin injections for those with type-I diabetes," Zibdeh echoes. And because of its unique beta-casein structure, it is recommended for treating those with autism. "A lot of autistic children have digestion issues," says Abdul-Wahab. "Superfoods like camel's milk that have anti-inflammatory properties help to heal these issues. We've seen improvements in eye contact, speech, and overall behavior in those with autism." And the list of camel's milk benefits goes on. "If camel's milk was more available and cheaper, I would definitely recommend it over these other options," says Zibdeh.

Though one 16-ounce bottle of camel milk is priced at a whopping $18, it might be worth forking up the dough to stock your fridge with a bottle or two!

The Beauty Benefits of Camel's Milk

Camel's milk has also become an in-demand ingredient in creams, ointments, and masks as it contains elastin, Vitamin C, and lanolin for next-level moisture, brightening, and baby-soft skin. Shea Terra Organics' Moroccan Lava & Camel's Milk Nomadic Secret Face Masque, as well as the Zafron & Camel's Milk Brightening Lait Cre'me are two cult-beloved offerings. And, coming down the pike is a new company MonoJo,  a pioneer in biotech therapies in the Middle East, that is currently seeking funding to create natural products to fight acne—with camel milk as a key ingredient.