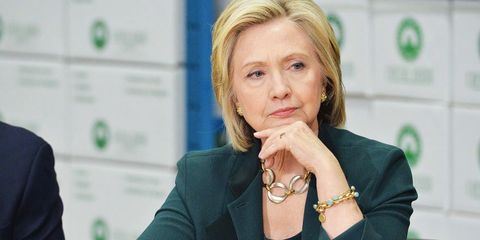 Hillary Clinton shouldn't be president because of hormones, says a Texas marketing CEO who apparently doesn't believe that her own hormones should also disqualify her from an executive position.

"We're built differently, we have different hormones," Cheryl Rios, the CEO of Go Ape Marketing, told KTXA-TV. "In the world that we live in, I understand that there's equal rights and that's a wonderful thing and I support all of that. I don't support a woman being president."

"With the hormones we have there is no way we should be able to start a war," Rios wrote in a Facebook post. "Yes I run my own business and I love it and I am great at it BUT that is not the same as being the President, that should be left to a man, a good, strong, honorable man."

According to Rios, "There's an old biblical sound reasoning why a woman shouldn't be President." Rios did not clarify which part of the Bible, which was put to paper before the United States of America existed, commented on the American presidency.

In her Facebook post, Rios said that if Clinton is elected, she is "moving to Canada" because "a female shouldn't be president."

Exactly How Much Less Money Women Make in 2015

"To Say He Wants to Bully Women Is Absurd": Kelley Paul Speaks Out About Her Husband's Latest Moves

Jill Filipovic senior political writer Jill Filipovic is a contributing writer for cosmopolitan.com.
This content is created and maintained by a third party, and imported onto this page to help users provide their email addresses. You may be able to find more information about this and similar content at piano.io
Advertisement - Continue Reading Below
More From Politics
How to Help Black Lives Matter If You Can't Donate
Does Your State Have a Tampon Tax?
Advertisement - Continue Reading Below
What's Ranked-Choice Voting? Allow Us to Explain
Paid Leave for All Isn't Just a 'Women's Issue'
Yes, Caregiving Is Essential Infrastructure
Unforgettable Signs From the Protests
23 Ways Women Still Aren't Equal to Men
Ma’Khia Bryant: What We Know
Greta Thunberg Expertly Trolled Boris Johnson
The Hope and Heartbreak of Derek Chauvin's Verdict