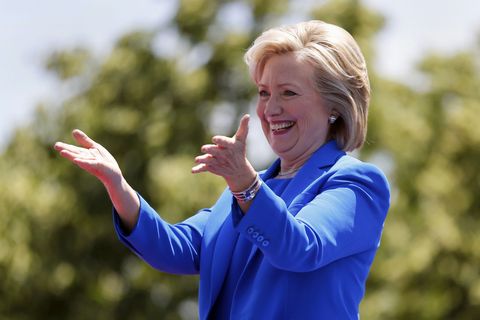 Every political candidate (especially Democratic) knows the power and deep pockets that comes with the support of Hollywood's elite, and Hillary Clinton is no rookie. This week, Clinton has been touring Southern California, rubbing elbows with A-listers and entertainment execs alike—and raking in serious campaign cash along the way.

Following a successful (with a capital $) donor event in Newport Beach on Thursday, Clinton shifted the fundraising into full gear on Friday. The packed schedule started in Beverly Hills with a mid-day luncheon hosted by Westfield Corp. co-CEO Peter Lowy ($2,700 per person), then a late afternoon gathering hosted by HBO executive Michael Lombardo (also $2,700 per person), ending with a sold-out event on Friday night at actor Tobey Maguire's home in Brentwood (again $2,700 per person, which is the maximum amount an individual can contribute to a campaign). The guest list read like movie credits with top celebrities such as Leonardo DiCaprio and Elizabeth Banks counted in attendance.

According to The Hollywood Reporter, Clinton gave a brief speech in which she requested the support of the entertainment industry "to help inspire and get people excited," before closing with a comment about having a grandmother as the next White House resident.

The evening's event alone was expected to raise over $500,000, with the total count for her trip coming to upwards of one million dollars. We hope her bags are big enough, because she's bringing home some major dough.

Sarah Lindig Senior Digital Editor, Special Projects Sarah Lindig is the senior digital editor, overseeing special projects for Harper's Bazaar.
This content is created and maintained by a third party, and imported onto this page to help users provide their email addresses. You may be able to find more information about this and similar content at piano.io
Advertisement - Continue Reading Below
More From Politics
A Debate Coach Grades Final Presidential Debate
A Guide to Celebrity Presidential Endorsements
Advertisement - Continue Reading Below
Twitter Has Thoughts On the Presidential Debate
Can You Vote Online in the 2020 Election?
What's at Stake for Abortion in the 2020 Election
Just 25 Celebrities Doing Their Civic Duty
Donald Trump's Twitter Was Hacked
Kristen Welker Is Moderating the Third Debate
The Swing States We Need to Pay Attention to Now
Your Guide to the 2020 Presidential Debates