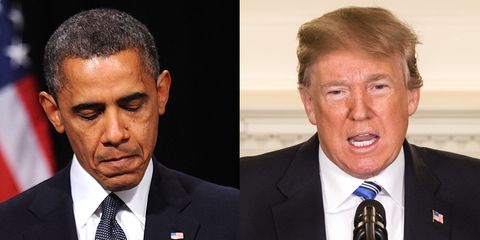 Gun control isn't a new issue. But after any kind of tragedy—like the student who opened fire in his Florida high school, taking the lives of 17 of his classmates, or the mass shooting in the Las Vegas at the Route 91 music festival that left 58 concertgoers dead and 851 injured—we turn to the person who has the power to influence those important decisions that would deter such terrible events. Enter: The President.

After the horrific incident that became the deadliest school shooting in the last five years, Donald Trump tweeted his condolences...but then blamed the students at the school for what happened:

So many signs that the Florida shooter was mentally disturbed, even expelled from school for bad and erratic behavior. Neighbors and classmates knew he was a big problem. Must always report such instances to authorities, again and again!

In the digital age, it's necessary for our president to have a platform to connect with citizens. During Barack Obama's presidency, he would often tweet about current events, keeping citizens aware of what he was doing in office. Since taking office in 2017, Donald Trump has made it his prerogative to use his Twitter account in a way we've never seen any other president do before: most often using his tweets to push policy change and personally attack media outlets, political figures, and celebrities.

MaireClarie.com analyzed Trump's and Obama's Twitter accounts to see just how many times each has addressed the issue of guns.

Trump has tweeted only 4 times about guns and gun policy.

Behold, the 4 times—out of nearly 37,000 tweets—where Donald Trump used the word "gun." Note: One of them was about Snoop Dogg.

The NRA strongly endorses Luther Strange for Senator of Alabama.That means all gun owners should vote for Big Luther. He won't let you down!

Do you notice we are not having a gun debate right now? That's because they used knives and a truck!

Can you imagine what the outcry would be if @SnoopDogg, failing career and all, had aimed and fired the gun at President Obama? Jail time!

Obama has tweeted or retweeted about guns 52 times.

Gun violence takes too many lives in our country. Congress must do something about it—add your name if you agree: https://t.co/H8Yh77Somm

We cannot accept our level of gun violence as the new normal. We must take action to prevent this from happening again & again. #WearOrange

A thought: Maybe Trump should be spending less time worrying about a hypothetical gun scenario with Snoop Dogg, and should focus more on addressing the real problem at hand.

Related Stories
We Need to Stop Normalizing Mass Shootings
Inside the Horror of the Las Vegas Shooting
Alex Warner
Advertisement - Continue Reading Below
More From Politics
Jot Down These 2020 Voter Registration Deadlines
What the ACLU Will Fight For in the Next 100 Years
Advertisement - Continue Reading Below
Behind the Controversy at the Women's March
Women Are Not Granted Equality in the Constitution
Electability Is About Us—Not the Candidate
Everybody Running for President In 2020
Time’s Up for Wall Street
Women of Color Ruled Last Night's Debate
Cory Booker, Rosario Dawson Are Traveling Together
Door Knocking With Field Organizers in Iowa