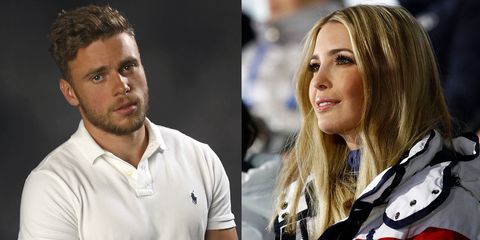 Ivanka Trump is attending the closing ceremony of the Olympic Winter Games in PyeongChang in South Korea today, but not everyone is impressed she's made the trip. And today, Olympic skier Gus Kenworthy tweeted about the president's daughter appearing at event, and he was less than enthused.

"So proud of all these people! Everybody here has worked so hard to make it to the Olympics and have the opportunity to walk in the closing ceremony! Well… Everyone except Ivanka. Honestly, tf is she doing here??"

So proud of all these people! Everybody here has worked so hard to make it to the Olympics and have the opportunity to walk in the closing ceremony! Well... Everyone except Ivanka. Honestly, tf is she doing here?? pic.twitter.com/sfJKi0VTDb

Representing the United States in the 2018 Winter Olympics, Kenworthy previously won a silver medal in the men's freestyle skiing at the Winter Olympics in Sochi, Russia, in 2014. The British-born American athlete didn't win any medals this time around, but that didn't stop him from calling out Trump's appearance.

While in South Korea, Kenworthy also visited a Korean dog meat farm with his boyfriend Matt Wilkas. The pair adopted a new dog, and called it Beemo:

Dogs are friends. Not food. pic.twitter.com/3wgx2oS2qv

In the emotional social media post, Kenworthy explained, "This morning Matt and I had a heart-wrenching visit to one of the 17,000 dog farms here in South Korea. Across the country there are 2.5 million dogs being raised for food in some of the most disturbing condition imaginable."

He went on to explain that, thanks to the Humane Society International, the farm he visited was being shut down, and several of the dogs were being rescued to the United States and Canada.