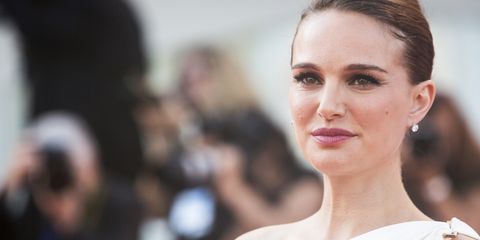 What is it about Natalie Portman? She just always seems so sweet. It’s the main reason why her Saturday Night Live gangster rap skits are so iconic—they're just such a reversal of expectation. I mean, the woman even gets a 100 percent Nice rating on Meanstars.com, a website I just found out about while writing this article but which I nevertheless trust implicitly!

So when she says something mean about someone, you get the sense they deserve it. Especially when the person about whom she says the mean thing is Jared Kushner.

On a Thursday night appearance on The Late Show with Stephen Colbert, Portman said that she and Kushner had gone to Harvard together and even “were friendly.” Past-tense, obviously. She confirmed rumors that Kushner was a bad student in school, and then added, “Unfortunately there’s not a lot funny to say about somebody you were friends with becoming a super villain.” Ouch.

She continued, “He said in an interview that the friends he’s lost because of politics, is like exfoliating.” Colbert joked that Kushner’s comment would make her a dead skin cell. “Proudly,” she replied.

It’s rare to see a celebrity rag on another—would we call Kushner a celebrity? Well, another well-known person. But when it comes to telling the truth about a member of the Trump administration, Portman was clearly willing to make an exception.

My only hope is that this in no way affects her niceness rating on Meanstars.com.

Here’s the full clip of her Colbert appearance:

This content is imported from YouTube. You may be able to find the same content in another format, or you may be able to find more information, at their web site.
Related Story
Behind The Scenes With Natalie Portman
This content is created and maintained by a third party, and imported onto this page to help users provide their email addresses. You may be able to find more information about this and similar content at piano.io
Advertisement - Continue Reading Below
More From Politics
A Valedictorian Speaks Out Against Abortion Bans
Standing Between Care and Violence
Advertisement - Continue Reading Below
Seeking Healing a Century After the Tulsa Massacre
What to Know about Texas's Abortion "Trigger Ban"
A New Book Invites Us to Rethink Menstrual Equity
We Must Remember George Floyd's Legacy
This Is How Much Joe Biden Is Worth
Joe Biden's Granddaughter Is His Biggest Fan
Watch Katie Porter Destroy a Big Pharma Exec
SCOTUS Will Hear a Major Abortion Case