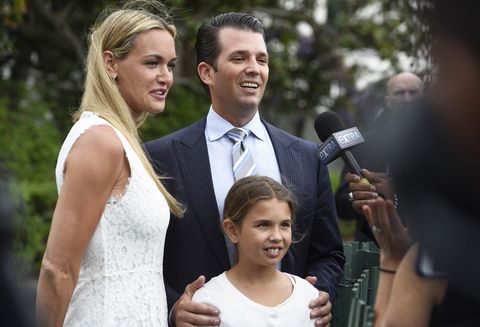 As more information comes out about the children of immigrants being taken from their parents at the border and placed in detention facilities and tent cities, the ability of people in Trump’s orbit to respond in the exact wrong way has been quite a thing to behold. Take Melania Trump’s tweet yesterday, in which she referenced how she and Queen Letizia of Spain discussed ways to “positively impact children” over tea:

A great visit with the King & Queen of Spain at the @WhiteHouse today. Queen Letizia & I enjoyed tea & time together focusing on the ways we can positively impact children. pic.twitter.com/IiaMQOil3K

Wow. That’s almost impressively tone-deaf, and the perfect mixture of vague and cruel in light of all the horrible news coming out of this country.

And, of course, there have been some knowingly despicable reactions to the administration’s zero-tolerance policy from those in the President's circle. Check out how former Trump campaign manager Corey Lewandowski responded when asked about a ten-year-old girl with Down Syndrome who was forcibly taken from her mother at the border:

Honestly, going Full Sociopath like Corey here might be the move for people who actually support family separation. At least it’s self-aware, and probably less embarrassing than what Vanessa Trump, wife of Donald Trump, Jr., did when she tweeted out this nugget of privileged ignorance on Wednesday morning (captured below via screenshot):

Here, I saw you deleted your "summer camp" tweet, so I saved it for you. pic.twitter.com/lJh5IUCNM5

That’s a, uh, nice tent your kids have there. You almost have to hand it to Vanessa. This is so incredibly tone-deaf that it can only have been a done in earnest (I'm pretty sure Melania was trolling). She clearly had no idea when she tweeted this what it would look like, and that's almost worse. But she was evidently made aware: The tweet was deleted almost an hour later.

It's easy to focus on gaffes and Twitter scandals when things feel especially dark and hopeless. But remember, there really are things you can do to help the families affected by this policy. Here’s a rundown of four ways you can help right now.

And, as ever, you can donate to the ACLU. Here’s a direct link.