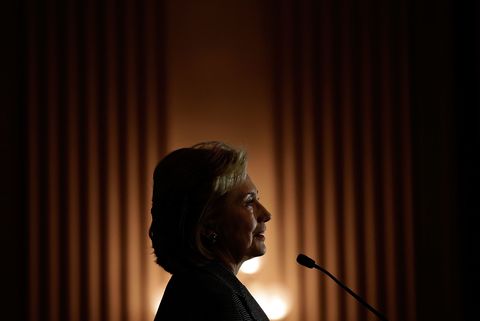 The 7,000+ pages of Hillary Clinton emails released on Monday—the largest release to date—continue to confirm that she's pretty much like the rest of us (weren't we all watching Parks and Rec in 2010?).  But this latest batch also contains some fascinating insight into how women at the very top of their field deal with questions of work/life balance, thanks in large part to a new character in the email saga—Anne-Marie Slaughter, Clinton's director of policy planning from 2009 to 2012.

Slaughter gained notoriety in 2012 when she wrote a popular (and controversial) cover story for The Atlantic titled "Why Women Can't Have it All." The article explains why she left her demanding job at the State Department to spend more time with her teenage sons, and argues that the "Lean In" approach alone isn't enough for women to combat the workplace and societal norms that limit their professional achievements.

Her conversations with Clinton show a glimpse of the environment that motivated her to write the article, and reveal some hard truths about the "family versus success" choice faced by many women who have intense jobs:

1. Women in leadership positions set the work-life balance example for their staff.

In two separate exchanges, it's clear that Slaughter looked to Clinton to show that it was okay to leave work and spend time with family. In one she sent to the Secretary via top aide Huma Abedin (subject line: "a family plea"), she urges Clinton to take off on December 21st because "it will mean that a lot of folks who would like to take some time off with their family before Xmas (e.g. moms like me who are necessary to make Xmas happen) would feel much freer to do so."

There's no indication if Clinton did take off the 21st, but it is apparent that not all of her staff felt the same way about the holidays. A chipper Thanksgiving day email sent by Jake Sullivan is a portrait of dedication: "I'm taking a break from peeling potatoes to report the following," he says, before making it clear that he's free to talk to Clinton that day.

Another email from Slaughter to Clinton on the eve of a government snow day reinforces the idea that women at the top set the tone.  "Your staying home tomorrow will make lots of parents at higher levels feel ok about staying home with their kids. I may be one of them!"

Clinton's response is basically: not my choice, but what are you gonna do? And, just like your boss, she's quick to remind Slaughter that "snow day" means a "work from home day."

2. Powerful women leaders can be punished for their family obligations—especially by men.

When circulating an article about the E.U.'s new foreign policy chief Lady Catherine Ashton and the "old boy's network" that does not give Ashton "much sympathy for her complicated family life, involving young children," Slaughter implores Clinton to use her power of good to fight against the patriarchy by speaking favorably of Ashton. In the brief response, Clinton seems intrigued by Ashton's family situation—or perhaps unimpressed by it.

3. It's on women to help lift up other women.

The biggest lesson to be learned from the Clinton/Slaughter conversations may be that women's strongest allies in the workforce are other women. In a follow-up to a conversation where Slaughter appears to have accidentally laid the blame on a departing female colleague, she explains, "I did not mean to make it seem as if Lissa is holding this up in an way… she has been making time amid an enormous array of important family obligations." Slaughter not only identifies the work/life balance as a viable reason to be behind, but turns it into a basis for praise.

Anne-Marie Slaughter was the first woman to hold her position at the Department of State—but her experience there led her to conclude that "juggling high-level government work with the needs of two teenage boys was not possible."

Next year, Clinton could shatter the biggest glass ceiling of them all—the presidency—but as these emails make clear, she and other women leaders like Marissa Mayer don't just pave the way for others by landing the job, but also in how they work within it. And sometimes setting an example is as easy as taking a snow day.

Scarlet Neath Politics Writer Scarlet Neath is a freelance writer covering politics.
This content is created and maintained by a third party, and imported onto this page to help users provide their email addresses. You may be able to find more information about this and similar content at piano.io
Advertisement - Continue Reading Below
More From Politics
In Conversation With Secretary Granholm
Laphonza Butler on What's Next for EMILY's List
Advertisement - Continue Reading Below
Anita Hill Believes We Can End Gender Violence
For Teachers, Going to Work Can Mean Life or Death
Want to Help Moms? Prioritize Menstrual Equity
Abortion Rights Start at the State Level
All of Your Abortion Questions Answered
The Texas Abortion Snitch Site Is Having a Bad Day
The Future of Afghan Women Depends on Us
How You Can Help People in Afghanistan