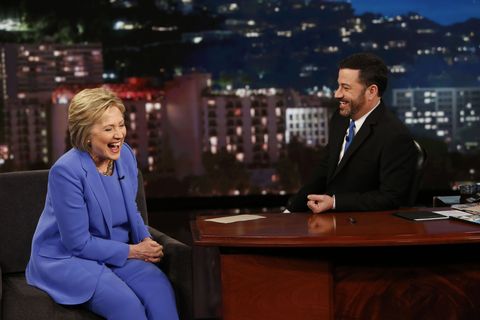 Remember when Hillary Clinton sat through the the 11-hour mansplaining session that was her Benghazi hearing? Yeah, that was the worst, but there's more mansplaining to be done, and this time it's courtesy of Jimmy Kimmel.

Kimmel and Hillary took part in a mock-mansplaining session during her appearance on his show, and it was equal parts hilarious and depressing (remember, this joke also happens to be her reality).

In other news, Hillary also spoke about her feelings on marijuana, which are less conservative than you might think. She might not want the federal government legalize it, but she's all for her fellow Americans getting high AF on a state level.

To echo Kimmel, no wonder she received an endorsement from Snoop Dogg.