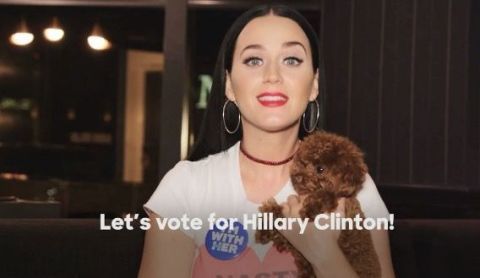 Katy Perry has been stumping for Hillary Clinton for months. She's been #WithHer since day one and she's asked everyone who will listen/follow her on social media to do the same.

But if you won't listen to Katy Perry, perhaps you could be swayed by an adorable, tiny dog, who is also a Clinton supporter. In her latest video for the Clinton campaign, KP enlisted the help of a tiny, sleepy puppy (named Nugget, because that name is the only thing that could make it cuter) who would also very much like for Hillary Clinton to be our next president.

"My name is 🐶 Nugget 🐶 and I approve this message. GO ✔OTE❗Find out where: http://hillaryclinton.com/locate," Katy captioned the video.

And who would want to go against the puppy vote, really?

Kayleigh Roberts Kayleigh Roberts is the weekend editor at Marie Claire, covering celebrity and entertainment news, from actual royals like Kate Middleton and Meghan Markle to Hollywood royalty, like Katie Holmes and Chrissy Teigen.
Advertisement - Continue Reading Below
More From Politics
Ayanna Pressley Wants Total Justice for Survivors
Jot Down These 2020 Voter Registration Deadlines
Advertisement - Continue Reading Below
What the ACLU Will Fight For in the Next 100 Years
Behind the Controversy at the Women's March
Women Are Not Granted Equality in the Constitution
Electability Is About Us—Not the Candidate
Everybody Running for President In 2020
Time’s Up for Wall Street
Women of Color Ruled Last Night's Debate
Cory Booker, Rosario Dawson Are Traveling Together