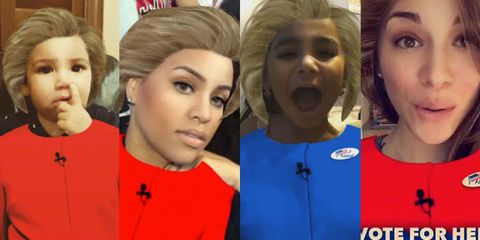 If you're #WithHer you can basically #BeHer, at least on Snapchat. A Hillary Clinton-themed Snapchat filter was released just ahead of Election Day and it transforms users into HRC, complete with her signature hairstyle and a red, white, or blue pantsuit.

According to The Hollywood Reporter, the filter is not a political endorsement on Snapchat's part; it was actually paid for by pro-Hillary Clinton Super Pac, Priorities USA. So we have them to think for the accompanying, "shimmy, shimmy, shimmy, shimmy, HRC" song that plays when you make a video (yes, shimmying is encouraged) with the filter being stuck in our heads for all eternity.

A lot of people used the app for still pictures to spread the word about supporting Hillary.

But a favorite thing to do with the app was to turn little kids into HRC, and it was as cute as you'd imagine.

Kayleigh Roberts Kayleigh Roberts is the weekend editor at Marie Claire, covering celebrity and entertainment news, from actual royals like Kate Middleton and Meghan Markle to Hollywood royalty, like Katie Holmes and Chrissy Teigen.
Advertisement - Continue Reading Below
More From Politics
Behind the Controversy at the Women's March
Women Are Not Granted Equality in the Constitution
Advertisement - Continue Reading Below
Electability Is About Us—Not the Candidate
Everybody Running for President In 2020
Time’s Up for Wall Street
Women of Color Ruled Last Night's Debate
Cory Booker, Rosario Dawson Are Traveling Together
Is Megyn Kelly a Feminist or What?
Door Knocking With Field Organizers in Iowa
“I Was Illegally Billed Seven Times for My Rape”