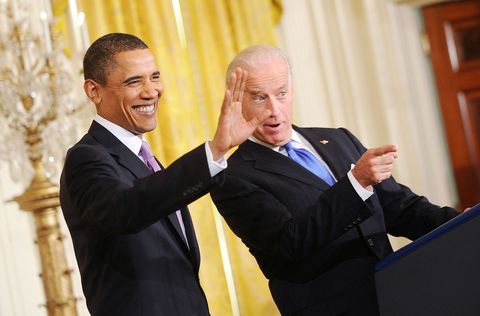 The Obama White House is going to be immortalized on the big screen and we can only hope that includes Barack Obama and Joe Biden's epic, meme-inspiring bromance.

Universal Pictures has optioned From the Corner of the Oval, a book proposal by former White House stenographer Beck Dorey-Stein, according to The Hollywood Reporter.

The book, which is expected out in 2018, won't focus on the gritty details of the Obama administration. Instead, it will be about the White House "as a workplace" and the relationships of the people who work there, told through the perspective of a young woman who goes from cocktail waitressing to employment with POTUS.

Here's hoping the "high-concept" comedy does capture the magic of how the internet imagined the Obama-Biden friendship, because these memes speak for themselves.

We would see that movie a hundred times.

Kayleigh Roberts Kayleigh Roberts is the weekend editor at Marie Claire, covering celebrity and entertainment news, from actual royals like Kate Middleton and Meghan Markle to Hollywood royalty, like Katie Holmes and Chrissy Teigen.
Advertisement - Continue Reading Below
More From Politics
Jot Down These 2020 Voter Registration Deadlines
What the ACLU Will Fight For in the Next 100 Years
Advertisement - Continue Reading Below
Behind the Controversy at the Women's March
Women Are Not Granted Equality in the Constitution
Electability Is About Us—Not the Candidate
Everybody Running for President In 2020
Time’s Up for Wall Street
Women of Color Ruled Last Night's Debate
Cory Booker, Rosario Dawson Are Traveling Together
Door Knocking With Field Organizers in Iowa