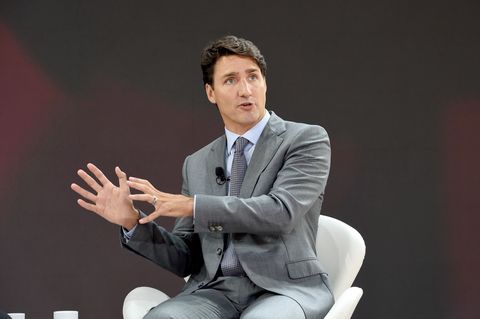 Aside from being a generally dreamy feminist who likes to randomly kayak up to fellow Canadians, Prime Minister Justin Trudeau is also known for wearing fantastic socks. And this week, during the United Nations General Assembly, Canada's leader rocked socks featuring Chewbacca from Star Wars.

Trudeau was photographed wearing the socks at the Bloomberg Global Business Forum, chatting alongside Christine Lagarde, managing director of the IMF, Dutch Prime Minister Mark Rutte, and the CEOs of Blackrock and Blackstone.

And he also wore them during a discussion with Melinda Gates at Goalkeepers 2017.

Twitter had a field day, which was the entire point, so kudos to the PR team for the prime minister. This wasn't even the first time he wore Star Wars socks; he celebrated Star Wars Day (May the Fourth be with you) with a different pair.

You guys, Justin Trudeau is wearing Chewbacca socks! And his country has healthcare! I'm gonna just say "aboot" and "eh" all the time. pic.twitter.com/7yMOxhmBTX

But at least one person was not having it. William Shatner, thinking Trudeau was a Star Trek loyalist, was dismayed by the fashion betrayal:

@JustinTrudeau I thought we were friends? 😳 Chewbacca socks? 😢 pic.twitter.com/CK6U9hGWkv

As prime minister, sometimes you have to make tough decisions. So, Trudeau, what's it going to be: Team Star Wars or Team Star Trek?