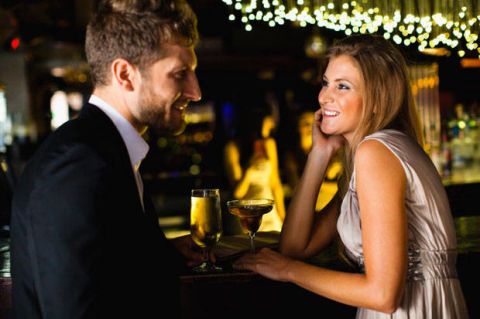 Before the slut-shaming ensues, I want to say for the record that I absolutely did not sleep with 157 men. As a matter of fact, of those 157 men, only a handful made it to the second date, and from that I only ended up seriously dating two of them. So, why so many dates?

I was T.I.R.E.D. of dating. To quote Charlotte York (Sex and the City), "I've been dating since I was 15! I'm exhausted! Where is he already?" Despite that NYC has millions of single guys, it's quite difficult to meet eligible (read: not currently in a committed relationship, sane, and has the same values as you) bachelors you'd actually want to go out with, so I took to online dating. But, I was done with that disappointment, too: Peruse profiles on various dating sites until a cute guy (although you know that photo was years old) graces the screen, casually browse what he wrote, and decide to send him a wink, swipe right, whatever. Then, the horror that ensues once you go on the date and realize he's not as tall/cute/smart/interesting/doable as his profile.

He was in his mid-thirties. A doctor. He was funny, charming, we had similar values, and life-long goals. He seemed at ease talking about one day getting married and starting a family. Overall, the first date was a success. It was one of those moments where you knew that this could lead somewhere. And, he was incredibly good looking too boot. Then we kissed right there at the small candlelight table we were sitting at. He told me he had hoped that wasn't too forward, but he'd really like to see me again. He was walking me to a cab from the bar when his phone rang. He looked at the screen, which I clearly could see, and the caller ID read "Wifey". Awesome. I had been on a date with a married man, although I didn't know until the end and after the good night kiss that he was married. I was suddenly, and through no intention, the other woman.

I went out with a guy who was definitely using his profile just for hook ups. That became quite apparent after I sat down next to him at the bar and no sooner ordered my drink that his hands were quickly moving up my thigh. This date wasn't going to end well for either of us: Either I was going to kick him square in his manhood and give him a bloody nose, or he was going to try to force me into doing something I didn't want to do. I got up to leave. He followed me. I got into a cab. He quickly got into the cab as it started to pull away. The cab was heading towards my apartment. I made it crystal clear that I had no intention of hooking up with him. He kept trying to smooth talk me and put his arms around me. The cab driver could care less. The cab stopped in front of my apartment and I ran out without paying. The driver, clearly upset over being stiffed stopped my date before he could get out probably to get him to pay. That gave me just enough time to open the door to my building and close it, locking gropey hands out.

The Great Guy (on Paper)

He seemed perfect. Great background, promising future, similar goals. He seemed really into me, too. He was flirting with me just enough: Making eye contact, lightly touching my hand when I told him the story about my sick dog, asking all the right questions, and responding to mine with the best answers. It was how every Rom-Com I'd ever seen said this was supposed to go. But there was one problem. He didn't pass my "I want to make out with you" test. I tried really hard to picture it. While he was going on about some story from college I tried to see myself kissing him. I just couldn't do it. It didn't feel right. So, back onto the market he went.

I remember the night I called my mom and told her I wasn't going to date anymore. I needed a break. There were tears (mostly hers at the thought of me never finding someone to settle down with and give her grandchildren) and bargaining (mostly her pleading with me). No thanks. I was done.

After an hour on the phone, I caved. As my mom continuously brings up: I gave her such grief as a teen that I basically owed her one. Fine. I'd continue to date, but this time I had a mission: to go on as many dates as I possibly could in a year and then call it quits. At the very least, it was a going to be a great way to meet a lot of people, make some new networking connections, and prove that I was going to be much happier on my own. I had very distinct goals for my career, a family (with or without a guy), and my lifestyle. I didn't want to compromise on any of it.

So date I did. I went out three or four times a week, sometimes I even doubled up (Gasp! The horror!). I met guy after guy, at bar after bar, and sat through awkward conversations, roaming hands, really disturbing eating habits, and incredibly forward requests. I was no closer to finding the elusive "one". Although, the one thing I had down to a science was the first date.

Always. It is a dating standard for a reason—it can be quick if needed and you're around a lot of people in case your date gets gropey. Two drinks max. Sorry, but it prevents one from making bad (really bad) decisions.

1 hour and 22 minutes. That is all the time you need to exchange pleasantries, share a few interesting stories, and wait for lust to kick in.

There's a lot to be said about chemistry—in my humble opinion, if you don't get that I-want-to-jump-you feeling, then they've found a place in your brain's friend zone. After all, you should want to kiss/make out/have sex with the guy you will one day marry, right? There are exceptions to every rule, but generally speaking you should trust your hypothalamus.

And finally, don't let the fact that you really, really want to get married one day soon be a deciding factor in whether you move Mr. Meh into second date material. If you're just not that into him, there's no sense in leading him on or wasting your time.

Of those 157 guys, I only dated two seriously and both didn't work out. One had been seeing two other girls behind my back after we had "the talk" to date exclusively and the other just wasn't meant to be: We both really liked each other, but the timing was off. He was enrolled in an executive business degree at Columbia and was on a fast-paced career track at work, while I was pursuing my own career goals—we were so busy with our own lives that we just didn't have enough time for the relationship. We eventually split after seven months of dating, but he called me about a year later (the day after his graduation) to see if I wanted to grab a drink. I couldn't...I was engaged.

How to Turn a 'Friends with Benefits' into a Boyfriend

8 Very Real Reasons He Broke Up with You

If Your Family Doesn't Like Him, Is the Relationship Doomed?