After not just one, but two earthquakes hit Mexico in September, the areas in Oaxaca and surrounding Mexico City are dealing with the long process of rebuilding. But that doesn’t mean you should cancel your trip, or avoid going there in the upcoming months. In fact, this might be the perfect time to go, especially considering that Aeroméxico and United have nonstop flights for less than $250 from cities across the U.S. from now through next spring. 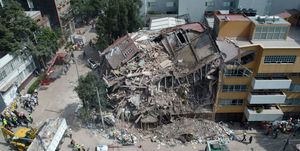 The Mexico City Tourism Board says that 96 percent of hotels were declared structurally safe by local officials and are currently operating as usual, Condé Nast Traveler reports. Many of the city’s museums have also reopened by now, including the Palacio de Bellas Artes, Museum of Anthropology and the Museo Frida Kahlo.

Keep in mind that the Roma and Condesa neighborhoods were affected the most by the earthquake last month, so Condé Nast Traveler recommends looking for hotels and Airbnbs in the nearby Polanco and Chapultepec neighborhoods, instead.

While the $196 fares from San Francisco, Denver and Washington D.C. to Mexico City that The Flight Deal reported yesterday are all gone by now, if you search Google Flights you can still find nonstop fares for less than $300 from most U.S. cities from now through this upcoming spring, including $260 flights on Aeroméxico from New York, and flights under $232 on United from Los Angeles, Atlanta, and Houston.

Lyndsey Matthews Freelance Writer Lyndsey Matthews is the Destination News Editor for AFAR; previously she was a Lifestyle Editor across all of Hearst Digital Media's brands, and a digital editor at Martha Stewart Weddings and Travel + Leisure.
This content is created and maintained by a third party, and imported onto this page to help users provide their email addresses. You may be able to find more information about this and similar content at piano.io
Advertisement - Continue Reading Below
More From Travel
6 Fun Trips to Take With Your Best Friend
Created for From Marie Claire for Created by Marie Claire for
Chase Bank
The Most Gorgeous and Useful Luggage Sets
Advertisement - Continue Reading Below
Celebrity Vacation Spots The Year You Were Born
Add St. Lucia to Your Post-COVID Bucket List
What to Buy From Away's Second-Ever Sale
Explore the Luxe Private Island of Cayo Espanto
Andros Is the Most Underrated Spot in the Bahamas
The Most Covetable Weekender Bags Out There
Intl. Resorts That Offer On-Site COVID-19 Testing
Magical Ski Destinations for a Safe Winter Getaway